With the power of Zone Dopant (ゾーン・ドーパント, Zōn Dōpanto), they user can teleport anything they see in a similar method in moving the pieces of a shogi board. The Zone Dopant is also the first Dopant to have no humanoid form at all, resembling a floating pyramid with an eye at the top that can shoot energy blasts.

The main user of the Zone Memory was Suzuko Arima (有馬 鈴子, Arima Suzuko), the wife of Maruo Arima. Ten years ago, Suzuko used these powers to assist her husband in his crime wave before she lost the Zone Memory, later found by Soukichi Narumi who then hid it in a bear statue he kept in a vacation cabin. When Shotaro found it, he confronted Suzuko about having Isamu Bito take the punishment for her crime before she took it back, enabling her to help Maruo out once more in his battle against Kamen Rider Accel. She was defeated by Kamen Rider Double CycloneJoker Xtreme's Bicker Finallusion Maximum Drive. 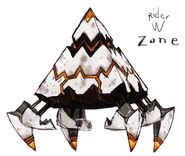 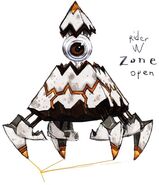 Retrieved from "https://kamenrider.fandom.com/wiki/Zone_Dopant?oldid=663986"
Community content is available under CC-BY-SA unless otherwise noted.