The Demon Imperial Sword Zanvat Sword (魔皇剣 ザンバットソード, Maōken Zanbatto Sōdo) was a sword of great power crafted and used by the previous King until he tossed the weapon into Castle Doran's wall. By 2008, after sensing the power of Wataru as he evokes Kiva's Flight Style, the sword forced itself out of Castle Doran's walls. It then resisted being pulled by others until Wataru pulled it out by seeking more power.

The Zanvat Sword is soon after modified with a living hilt named Zanvat Bat (ザンバットバット, Zanbattobatto), called "Zanvat" for short, who was created from the Life Energies of the Arms Monsters to control the unstable powers of the blade from evoking Wataru's Fangire blood. Though Wataru is accepted as an ideal user, he has yet to fully master the Zanvat Sword's true power.

When used by Kiva in Emperor form, its finishing attack is the Final Zanvat Slash (ファイナルザンバット斬, Fainaru Zanbatto Zan) where Kiva's power is focused into the Imperial Blade (インペリアルブレード, Inperiaru Burēdo). The attack is powerful enough to destroy giant monsters such as Six Pillars Sabbaths and even a Mother Sagarc.

The Zanvat Sword is composed of the following parts:

Kiva was seen using Zanvat Sword in the first scene of the Rider War in Kiva Form. During episode 30, the A.R. Kiva uses the Zanvat Sword to perform the Final Zanvat Slash along with Thorn Fangire in order to kill the A.R. Leangle.

It is shown in OOO, Den-O, All Riders: Let's Go Kamen Rider that Kiva can use the Zanvat Sword without transforming into Emperor form, but cannot use the Wake Up finisher though the situation was different with his A.R. counterpart.

An imitation of the sword was in possession of the holographic Kamen Rider Dark Kiva created by Foundation XKamen Rider Brave ~Let's Survive! Revival of the Beast Rider Squad!~

The Zanvat Sword is also among the various Rider Weapons used by Ganbarider in Kamen Rider Battle: Ganbarizing. 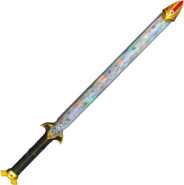 Zanvat Sword in its original state

Wataru possessed by the power of the sword

Retrieved from "https://kamenrider.fandom.com/wiki/Zanvat_Sword?oldid=636242"
Community content is available under CC-BY-SA unless otherwise noted.