Kiba was the primary user of the Orga Gear. In the events of the film, Yuji Kiba was tricked and abducted by the Smart Brain corporation into believing Mari Sonoda has betrayed him, later chosen to be the user of the Orga Gear, allowing him to transform into Kamen Rider Orga. The Orga gear was recorded as the fifth Rider Gear created by Smart Brain, after the Faiz and Kaixa Gears were stolen by the humans and the Riotrooper gear had undergone mass-production. Created alongside the Psyga Gear, the Orga Gear is regarded as a "perfect" gear, and therefore it can only be worn by Orphnochs. Kamen Rider Orga has a more ornate appearance than any of the previous Gears, the Rider form having robes made of Soul Foam for a majestic appearance. Orga is armed with the Orga Stlanzer sword which he uses in the Orga Stlash Exceed Charge. He is sent to fight Kamen Rider Faiz after Psyga is defeated. Faiz is finally able to defeat Kamen Rider Orga with Blaster Forms Rider Kick, but does not kill him. Instead, Orga dies while trying to hold off the Elasmotherium Orphnoch so Faiz can destroy it, after Takumi finally gets through to him and reminds him of what Smart Brain really stands for and what his true values are.

Kamen Rider Orga appears with other kamen Riders commanded by Wataru Kurenai, but all are murdered by Decade in the episode 1 of Kamen Rider Decade in the dream of Natsumi Hikari and then concluded the dream with Decade as only Rider in the Rider War. Rider War

In the special version of episode 31, Kamen Rider Orga is seen as one of the many Kamen Riders who fought in the Rider War against Decade and were all destroyed. They were presumably restored after the destruction (and subsequent revival) of Decade at the end of the Rider War and the worlds were restored. The Destroyer of Worlds

Kamen Rider Orga appears a poster, when Sento Kiryu and Sougo Tokiwa they find Ataru Hisanagahe brings them to his room which is filled with Kamen Rider memorabilia, with Sougo and Sento stunned to see toys of themselves. Ataru reveals that Kamen Riders are fictional.Kamen Rider Heisei Generations FOREVER

Kamen Rider Orga is the main antagonist in this stage show, Ogre has the goal of changing history using the time machine to create a world exclusive to Orphenoch and for Faiz to be his friend,Orga alied with Roidmude to eliminate all Kamen Riders 1,2,Faiz,Drive,Match and 3,he had battle whith Takumi again ,later Orga is destroyed by all Riders Kicks of 1,2,3,Drive and Match.Kamen Rider Drive show (Episode 4)

Yuji Kiba as Orga, appears as an unlockable character in this game. His Rider his Finisher is transformed into Orga and executes Orga Stlash in All Kamen Rider: Rider Revolution.

Kamen Rider Orga and Horse Orpnoch Violent Emotion appears as a playable character with the other Heisei and Showa Kamen Riders in Kamen Rider Riderbout. 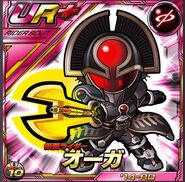 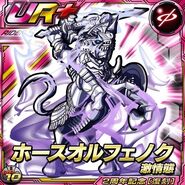 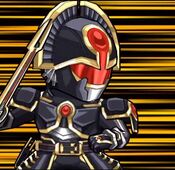 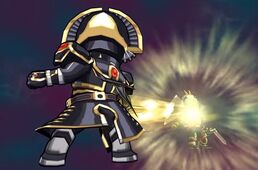 Kamen Rider Orga appears as a playable character with others Kamen Riders in the video game, performing his Orga Stlash against his enemies in Kamen Rider Transcend Heroes.

Kamen Rider Orga is seen in the game as a playable character among other Kamen Riders in Kamen Rider Battle: Ganbarizing.

Kamen Rider Orga appears with other Kamen Riders and Monsters in Battle Spirits.

The movie version of Horse Orphnoch's design called Violent Emotion (激情態, Gekijōtai) is dramatically different than that of the TV series. It now sports a more helmet-like head design as the horse snout is pushed upward to evoke a more human-like face. The singular horn's enlarged and moved toward the top of its head while its white mane extends much fuller all the way down to the base of its neck/back. The hoof design on its chest is replaced by a larger and more powerful chest armor.

In the Paradise Lost ending, Kiba was deceived into using the Orga Gear to fight Faiz, but aided him and died from injuries sustained by the Elasmotherium Orphnoch. However, he was able to wound it enough for Faiz to finish it off.

This form is exclusive to Kamen Rider 555: Paradise Lost.

This form is exclusive to Kamen Rider 555: Paradise Lost.

Kamen Rider Orga (仮面ライダーオーガ, Kamen Raidā Ōga) exists in a world where the Orphnoch have taken over the planet and the humans are slowly being exterminated. The Orga Gear was recorded as the fifth Rider Gear created by Smart Brain, after the Faiz and Kaixa Gears were stolen by the humans and the Riot Trooper gear had undergone mass-production. Created alongside the Psyga Gear, the Orga Gear is regarded as a "perfect" gear, and therefore it can only be worn by Orphnoch. SIC Hero Saga Kamen Rider 555 further explain that Orga Belt was originally created from the original Delta Gear that was retrieved by the Rose Orphnoch from Mihara.

Kamen Rider Orga has a more ornate appearance than any of the previous Gears, the Rider form having robes made of Soul Foam for a majestic appearance. Orga appeared to have immense strength on par with Kamen Rider Kaixa, however it appears to be much slower than Faiz. Unlike Psgya, the Orga gear's weapons are still visible while not transformed, although Orga's sword, the Orga Stlanzer, is not disguised as an everyday household item.

The Orga Gear was given to Yuji Kiba after he had been fooled into thinking he had been betrayed by the humans. He only transformed with the Gear once however, before he was killed by the Elasmotherium Orphnoch and the Orga Gear self-destructed.

The Orga Armor has several key features in its design. Unlike the Gear, the armor does not exist until the wearer transforms. 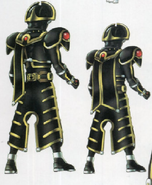 Retrieved from "https://kamenrider.fandom.com/wiki/Yuji_Kiba/Paradise_Lost?oldid=634890"
Community content is available under CC-BY-SA unless otherwise noted.