1 (Movies)
1 (Specials)
Full list of appearances
The Yomimaru (黄泉丸, Yomimaru lit. "Underworld Circle")[1] is the Armored Rider Arms Weapon granted by accessing Fifteen's default form, as well as a standard side weapon either in other forms or when the user is untransformed. To summon the Yomimaru in Fifteen's default form, the user must cross their arm across their chest. The energy that is formed when creating the Yomimaru can also be used for an energized slash attack. Kamen Rider Maja have a purple and golden colored variant of it.

Kamen Rider Maja
Add a photo to this gallery

Fifteen summoning Yomimaru from his chest 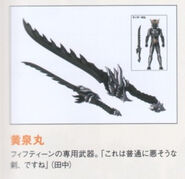 Retrieved from "https://kamenrider.fandom.com/wiki/Yomimaru?oldid=630133"
Community content is available under CC-BY-SA unless otherwise noted.