For the A.R. World with the same name, see World of Stronger (A.R. World).

World of Stronger (ストロンガーの世界, Sutorongā no Sekai) is the first Kamen Rider Decade Edition of S.I.C. Hero Saga, based on Kamen Rider Decade. It tells of how Tsukasa and the Hikari Studio crew enter the reality in which Kamen Rider Stronger takes place and meet up with the characters within, such as the original Shigeru Jo. The first episode was published in Hobby Japan, June 2010.

It's the same afternoon, in the same Hikari Photo Studio. However, Tsukasa started to feel uncomfortable. He stands up and decides to open the door only to see a middle-aged man with a cowboy hat flying in. A photo screen rolls down from the shock.

The man tells that his name is Tobei Tachibana and calls Tsukasa "Shigeru". Yuusuke and Natsumi takes a closer look on Tsukasa, they notice that he's wearing a red sweatshirt with the letter "S" on the chest and a pair of blue jeans.

Tachibana informs Tsukasa that Yuriko has been captured by Staff Officer Steel and pushes Tsukasa into his jeep. They soon arrive at the wasteland and Tsukasa goes to confront Staff Officer Steel. Tsukasa's opponent seems to be calling him Shigeru as well. Tachibana puts his shoulder on Tsukasa and says "Come on, just say your usual lines!"

Tsukasa decides to listen to Tachibana and starts shouting "The heavens call. The earth cries out. The crowd roars. They are calling me to defeat evil! I am just a Kamen Rider passing by!" Tachibana is angered because of the change in the usual catchphrase, Tsukasa simply ignores him and transforms into Kamen Rider Decade.

Tsukasa Kadoya who entered the World of Stronger has for some reason been called "Shigeru." Tsukasa kept thinking "could it be that we are like two peas in a pod? Anyways, he'll probably realize I am not that guy after transforming." However, Tachibana was simply surprised that "Stronger" had changed so much.

"What happened to the kabuto beetle?" Tsukasa who thought Tachibana was annoying decides to transform into Kamen Rider Kabuto. Tachibana noticed how he was so different from usual and wondered if something had happened, he went to save Tackle by himself.

Decade Kabuto used his Clock Up card and kicked around the grunts. "Hey, don't you care about the hostage!?" said Staff Officer Steel as he threw his iron ball towards Decade Kabuto. Decade Kabuto Form Rides into Kabuto's Masked Form and stopped the iron ball. Doctor Kate appears before Tachibana.

Doctor Kate pointed to the defeated Tackle. Tachibana hurried over there, Tackle had been exposed to the Kate Gas for too long. Her body temperature had fallen drastically and her body was shaking. Tachibana kept shouting for help. Tsukasa chose to Cast Off and Clock Up only to play around with Staff Officer Steel.

Suddenly Stronger (that is, Decade Kabuto) disappeared and Staff Officer Steel exploded from all the injuries which left Tachibana completely dumbfounded. All of sudden, Tsukasa is standing in front of Tachibana. According to Doctor Kate, they can save Tackle if they can push out the Kate Gas out of her.

Tsukasa started shouting for Kaito and Kaito suddenly came out from behind a rock. Tsukasa wanted to borrow one of Kaito's treasures, the Perfecter he stole from Apollogeist in the World of RX. "I don't think there's any life inside this thing." said Kaito.

"Kaito, you are a thief right? Just take the life of Doctor Kate."

Kaito listened to Tsukasa's words and transformed into Diend.

The violent fight between DecadeKabuto and Stronger unfolds. Stronger tells Decade that if he saves Yuriko, all the Yuriko's in the other worlds will be affected as well. Stronger activates his Charge Up and Decade goes into Hyper Kabuto.

Before Decade is able to go into Hyper Clock Up mode, Stronger uses his special attack, Super Electro Lightning Kick, on Decade. Hyper Kabuto is defeated. However, the Perfecter Stronger was holding is gone. Stronger looks in front of him and sees Decade Complete Form. The Hyper Kabuto that Stronger defeated was only one of Decade's summons.

Shigeru and Tsukasa revert back to human form and Tsukasa asks Shigeru why he won't save Tackle. When Tackle died, Shigeru blamed himself for being too weak and inserted the Super Electron Dynamo in his body. Stronger says that this isn't his world because of what has happened isn't supposed to happen. Yuriko must die in this world. If this Yuriko lives, all the other Yuriko's will be affected. Stronger might not undergo the Charge Up surgery, this might cause him to lose against the Delza Army.

Tsukasa equips the Perfecter on Tackle and she's brought back to life. Tsukasa gets an uncomfortable feeling and transforms into Decade.

Tackle, who came back to life, noticed a strange rocky mountain. The mountain reveals it's true identity as the Great Leader. When Shigeru sees the Great Leader, he's surprised and thinks "this is a different world." In his own world, he and the 6 other Riders had already defeated him. Shigeru notices that they are only 4 here, though Tsukasa mentions together with Yusuke they are 5. However, Shigeru says that he can't interfere with what's happening in this world and he won't fight.

Suddenly, General Shadow appears and leaps towards Shigeru. The Great Leader throws boulders towards Tackle and Decade. Together they push away the boulder, but it's now heading towards Tachibana. Tsukasa tells Shigeru to save Tachibana.

The boulder is still rolling towards Tachibana, Tsukasa is still telling Shigeru to save Tachibana. Shigeru is refusing and says that he can't interfere with what's happening. Yusuke appears out of nowhere and quickly transforms into Kamen Rider Kuuga Mighty Form and saves Tachibana right before the boulder hits him. The Great Leader suddenly crushes General Shadow and is trampling on Tackle. Shigeru is still refusing to fight, which angers Decade so he turns Kuuga into Kuuga Gouram and rides on top.

Narutaki shows up through an aurora curtain and watches the fight. Decade and Kuuga are having a hard time fighting the Great Leader. Tackle is using her bike and Tachibana's jeep with wires in hopes of tying up the Great Leader. However, the wires were easily cut. Shigeru knows that the Great Leader's weak point is inside his mouth, but he's refusing to help.

Narutaki walks towards Shigeru and tells him to defeat Decade. After hearing Tsukasa say "You are not an ally of justice, if you going to let someone die without doing anything." Shigeru decides to finally transform into Stronger and hits Narutaki. Stronger tells Decade about the Great Leader's weak point.

Decade jumps down behind Stronger and uses a Final Form Ride card. Stronger suddenly turns into a huge Kabuto Beetle called Strong Zecter. Tackle jumps up on Stronger's back. Stronger and Kuuga flies towards the Great Leader.

Suddenly a dazzling light covers Tackle, Decade and Kuuga. When the light disappears, Kuuga has changed into a new form.[1]

Kuuga attacks Decade and Diend, Tackle heads to the Great Leader who is controlling the giant rock. The Great Leader wants Tackle to work for him, The Great Leader reveals himself and he's the Shigeru of the world that they are in. Shigeru tried to defeat the Great Leader, but he never found him. Shigeru started doubting everything and thought that his friend Numata Goro never existed. Shigeru knows that his feelings for Tackle were real. Tackle uses the Ultra Cyclone while hugging Shigeru.

Decade is still fighting Kuuga as Stronger uses his bike and shocks Kuuga, which the latter turns back into Mighty Form. The giant rock stops moving, Stronger can't find Tackle and realizes that she defeated the Great Leader. Stronger leaves with his bike, because he doesn't belong to this world. Diend leaves in the middle of everything like always. Tachibana shows up and still thinks that Tsukasa is Shigeru. Tsukasa gives Yuriko a pendant, inside there's a picture of a smiling man.[2] 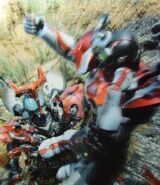 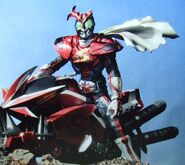 Retrieved from "https://kamenrider.fandom.com/wiki/World_of_Stronger?oldid=583119"
Community content is available under CC-BY-SA unless otherwise noted.