The Wizard Lockseed was created in the world of the Warring Period through the combination of a Helheim's Fruit provided by the Priestess of Fate and the Flame Wizard Ring left behind by Kamen Rider Bujin Wizard. Among a gathering of Legend Rider Arms, Wizard Arms was assumed by Armored Rider Gaim who used it to fight alongside the real Kamen Rider Wizard Infinity Gold Dragon against Kamen Rider Bujin Gaim. Boarding a Dandeliner, Gaim flew alongside Wizard to the God Tree before they were both enveloped inside it, where they proceeded to use the Bujin Riders' power to break out and defeat Bujin Gaim. Kamen Rider Gaim: Sengoku Battle Royale

Duke Wizard Arms
Add a photo to this gallery 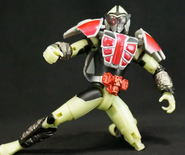 Kamuro Wizard Arms
Add a photo to this gallery

This form's Arms Weapon is the WizarSwordGun.

WizarSwordGun
Add a photo to this gallery

Retrieved from "https://kamenrider.fandom.com/wiki/Wizard_Arms?oldid=555563"
Community content is available under CC-BY-SA unless otherwise noted.