WizardArmor (ウィザードアーマー, Wizādo Āmā) is a Kamen Rider Wizard-based form accessed using the Wizard Ridewatch, invoking Kamen Rider Wizard's Flame Style. It is summoned via a Magical Portal which partially passes over the wearer before transforming into its proper armor form. WizardArmor's Flame Ring Shoulders (フレイムリングショルダー, Fureimu Ringu Shorudā) are modeled after the Flame Wizard Ring, and depending on whether it is used by Zi-O or Geiz, its visor spells out "Wizard" (ウィザード, Wizādo) in katakana or "Wizard" (うぃざーど, Wizādo) in hiragana respectively.[1] 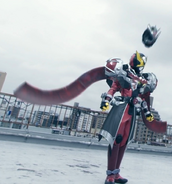 WizardArmor upon summoning
Add a photo to this gallery

On December 8th 2018, Geiz assumed the WizardArmor alongside Zi-O GaimArmor to fight Another Ghost. Geiz soon pointed out that it was more appropriate to use Ghost's power and so loaned him the Ghost Ridewatch to assume GhostArmor. Geiz and Zi-O quickly overwhelmed Another Ghost but were stopped just short of performing their respective finishers when Heure revealed that to defeat the Another Rider would kill him. In this moment of hesitation, the two Riders were assaulted by the Flame Saber of Kamen Rider Decade: Agito Ground Form, forcing Geiz out of his transformation. Ghost Hunter 2018

While fighting Another Zi-O's assembled Another Riders with Zi-O, Geiz used WizardArmor's Strike Time Burst to defeat the second Another Wizard, freeing its human host. Our Goal 2019 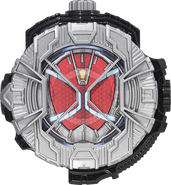 Wizard Ridewatch (Inactive)
Add a photo to this gallery

Geiz leaps to air as he absorbs the flames coming out from the Wizard's Flame Style Magical Portal on his feet, then performs a Flying Kick, with his right leg enlarged to massive size by another Magical Portal, thus destroying the enemy.

Geiz creates a Wizard's Flame Style Magical Portal on his feet, then performs a Side Kick, with his right leg enlarged to massive size, thus destroying the enemy.

Retrieved from "https://kamenrider.fandom.com/wiki/WizardArmor?oldid=612060"
Community content is available under CC-BY-SA unless otherwise noted.