Who Stole the Woman's Smile?

Who Stole the Woman's Smile? (だれが彼女の笑顔を奪ったのか, Dare ga Kanojo no Egao wo Ubatta no ka) is the third episode of Kamen Rider Drive. It introduces the Shift Cars Dream Vegas, Spin Mixer and Massive Monster and their respective Tire Exchanges with Drive Type Speed, with the latter two cars respectively corresponding to Drive's alternative Types, Technic and Wild, which would appear soon after. It also features Chase's first transformation into Mashin Chaser. Dimension Cab makes a brief appearance in this episode via flashback.

Shinnosuke and Kiriko are sent to investigate an art gallery where there have been rumors of women's ghosts being eaten by a monster, but when they arrive they find the owner Asaya refuting the rumors while asking Kiriko to model for him. While suspicious of Asaya, Shinnosuke investigates the gallery, only to be hit by the "Heaviness" and the appearance of a Roidmude targeting Kiriko.

A new case reported in the Joutoku Museum of Modern Art where Heavy Acceleration waves reported with two female students kidnapped. While Shinnosuke and Kiriko at the cafeteria, a new Shift Car appeared which surprised Kiriko. After investigating the kidnapping at the museum, Genpachiro dismissed it as a normal kidnapping until Kyu related it with a haunted atelier case a week ago. A local housewife reported that she saw a group of female ghosts devoured by a monster. He suspected that same monster might had relation to the current kidnapping case.

Soon, Shinnosuke, Kiriko and Kyu went to the atelier and met Kazuhiro Asaya, an artist, whom desired to have Kiriko as his latest model. Nonetheless, he dismissed such fact that his atelier is haunted. As the three went out, an evolved Roidmude appeared out of nowhere and attacked them. The Roidmude slowly turned Kiriko into data stripes until the new Shift Car Dream Vegas came and save her. As Shinnosuke transformed to Drive, he used the new Shift Car. Though he managed to gain the upper hand, but to no avail as his Full Throttle only launched one small coin. The Roidmude escaped while Mr. Belt revealed that Dream Vegas was after the Roidmude that attacked Kiriko during the Global Freeze.

The three Roidmude commanders chased one rogue Roidmude that made a wrong attempt of robbery until Chase transformed into Mashin Chaser and destroyed him with Break Up attack. His core was preserved but he managed to tell them to keep an eye on Paint. After a stressed Kiriko leaved the Drive Pit, Mr. Belt explained her history during the Global Freeze. One night, while on her routine, she was attacked by Roidmude 010 whom nearly converted her into data. She believed Paint Roidmude is the same one she faced sometime ago. It wasn't until Kamen Rider Protodrive saved her. But unlike Shinnosuke, he lacked the ability to destroy their Cores and so he lost his life.

Kiriko was later lured by Fujimiya (Kazuhiro's student) into his atelier to reveal the truth. With Kyu's help, Shinnosuke finally solve the case. Kiriko entered Kazuhiro's atelier and discovered that his paintings are converted versions of female victims. As the artist came into his art gallery, Kiriko was dragged away by Fujimiya, before he revealed himself as Roidmude 084 and converted Kiriko into a data for his drawings. Shinnosuke revealed that the faces of the missing women are accurate to Kazuhiro's drawings. The haunted atelier case was about the abducted women tried to escape until 084 recapture them. Yet, the man named Fujimiya never existed and when Kiriko cannot be contacted, this means she was in danger. Shinnosuke transforms into Drive and battle the Roidmude with Spin Mixer Shift Car. Both his body and Core destroyed but several paintings remained meaning he wasn't the only culprit. Mashin Chaser introduce himself and challenged Drive to fight. 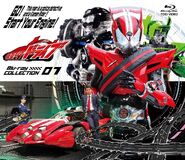 Retrieved from "https://kamenrider.fandom.com/wiki/Who_Stole_the_Woman%27s_Smile%3F?oldid=588996"
Community content is available under CC-BY-SA unless otherwise noted.