When Did Kyu Saijo Become a Roidmude?

The Unit is shocked to find two Kyu Saijos. Which one of them is real, and which is not?

Shinnosuke, Kiriko, and Go are on their way to Kyu's autograph session when a Heavy Acceleration wave was released and a giant television screen on a building exploded. Go quickly transformed into Mach and rushed to the scene. As Roidmude 072 was about to drop a female victim from a height, Mach and Drive appear, causing him to feel amazed as he had finally seen the two Kamen Riders. Drive notes that he sounds familiar. However, he ran away after two half-evolved cockroach-like Roidmudes attacked him and overpowered the Riders.

Mr. Belt gets Kiriko and the Shift Cars to track 072, only to end up at Kyu's apartment. Shinnosuke and Go arrive there as well, and the three hear what seems to be Kyu arguing with himself. They barge inside to find two Kyu Saijos inside, and arrests them both. Meanwhile, Medic introduces Heart to her Reaper Legion Roidmudes that were tasked to carry out Chase's former duty as a Grim Reaper as Brain gets jealous of her overwhelming success.

At the Special Investigation Unit office, both Kyus were distinguished by wearing different colored shirts, one known as Black-Saijo, and the other, White-Saijo. Black-Saijo tries to lie that both of them are twin brothers, but none of the other unit members fall for it. They end up being interrogated at separate rooms. White-Saijo tells Kiriko and Shinnosuke that he met Roidmude 072 on New Years' Eve. As he was unable to kill Kyu, the two stayed together, with 072 taking over Kyu's place in the Unit at times, trying to gather information about the Kamen Rider.

As both Kyus exit the Kuruma Driving Office, Gen threatens to force a confession out of them with a fake rifle but fails. Shinnosuke arrives and brings out a limited edition of a commemorative plate (a replica made by Shift Cars Colorful Commercial and Spin Mixer) of the anime Murmur Mansion. He throws it into the air, and both Kyus rush towards it. White-Saijo catches the plate, exposing his true identity as Roidmude 072, as the real Kyu is less athletic. Shinnosuke figures that Kyu was not coerced into living with 072, he chose to live with 072 on his own accord. The real Kyu reveals that before 072 was about to kill him, Kyu requested that 072 let him watch the final episode of his favourite anime before his death. Both Kyu and 072 watched the anime, and were touched by it. Ever since then, Kyu and 072 lived together.

At the day of Kyu's autograph session, 072 went to the press conference for the movie edition of Kyu's favourite anime, Murmur Mansion. However, once he hears that the movie will be dubbed over by voice actors and actresses, one of them being the victim from earlier in the episode, he went berserk and released the Heavy Acceleration wave, and went on to punish the voice actress, as the anime is better with subtitles and using voice actors would ruin the anime. Shinnosuke sees 072 as a good guy, affirming his belief that Roidmudes and humans can coexist in harmony. Kiriko is reminded of Chase after hearing this. As 072 tells his wish of continuing to stay with Kyu, he is killed by Medic. As he dies, 072 instructs Shinnosuke to lie to Kyu that 072 went berserk and was defeated by the Kamen Rider, in order not to affect Kyu emotionally too much.

While Go as Mach attacks the Reaper Legion, Medic claims herself and the others as the new Reapers and says that no matter how many times they reset rogue Roidmudes, those Roidmudes would get out of the line again. To solve this, she and her Reapers secretly eliminate their Cores. Drive objects to her explanation and labels her a demon compared to Chase, the former Reaper, who gave rogue Roidmudes a chance to live again by retaining their Cores, and assumes Type Dead Heat to attack her. After assuming Type Dead Heat Flare, he initiates a Dead Heat Drop while Medic uses her Reapers to cover her escape. Drive screams loudly in anger after the battle.

Kyu was deeply affected by his loss after Shinnosuke told him the lie but still, Jun comforted him. Shinnosuke quickly ran away while Kiriko was forced to help Jun filling in his reports.

Standing at a ship, Medic is disgusted at Drive for being able to lay an injury on her. She transforms into her Advanced form.

Kamen Rider Drive Volume 5 features episode 17-20: Who Will Control Deadheat?, Why is Lt. Otta Following That Guy?, What Can Judge the Police? and When Did Kyu Saijo Become a Roidmude? [1] Collection 2 comes with 12 episodes. 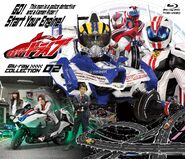 Retrieved from "https://kamenrider.fandom.com/wiki/When_Did_Kyu_Saijo_Become_a_Roidmude%3F?oldid=500538"
Community content is available under CC-BY-SA unless otherwise noted.