What is Waiting At the End of Evolution?

What is Waiting At the End of Evolution? (進化の果てに待つものはなにか, Shinka no Hate ni Matsu mono wa nani ka) is the thirty-second episode of Kamen Rider Drive. This episode marks the debut of Freeze's Over Evolved Roidmude form and the apparent death of Shinnosuke Tomari.

Shinnosuke continues his fight against the Freeze Roidmude, undeterred by the power the first Roidmude possesses. However, Freeze obtains his Over Evolved form, and uses it to kill Drive for good.

After Drive forcefully de-transformed from Freeze's snowstorm attack, Freeze decides to retreat, given that his strength is still incomplete. Chaser still fights Mach and the latter escapes after exchanging firepowers. At the Unit's office again, Mr. Belt gets into an argument again with Shinnosuke, as Jun broke their fight and brings Krim away to cool him down. While Kiriko calms down Shinnosuke, Jun brings Krim to his favourite scenery at the rooftop and calms him as well.

In the Unit's discussion, the team try to figure out how to counter the memory manipulation effects made by Freeze. Chase reveals that another method of Freeze's memory manipulation was by replacing his target's memories related to a certain keyword with forged ones. Genpachiro and the First Division officers were among the victims, with his inability to pronounce Roidmude being unintentional. Kyu also reveals that other than Iwao Fujiki, there are other 20 serial kidnappings that happened using the mail sent in by Mister X, which started to happen since 12 years ago, the same year of Eisuke Tomari's death.

Genpachiro tried to tell his employer Mitsuhide Nira that Makage is guilty for a lot of cases but as always, he turn on deaf's ears. Nira tried to report this to Makage since the Special Investigation Unit would eventually find the truth later on but Makage has no worries in his sight and even dismisses Nira, having no further use of him. Shinnosuke seeks Mr. Belt's help, wanting to remove Freeze's needles that injected to him so that they can create a cure to counter it. But even with Mad Doctor's help, Shinnosuke needs to be in the same condition he was injected with the needle, meaning that he has to be in his human state, which is incredibly dangerous without Drive's armor. Chase in the other hand deals with Heart to get an answer the meaning behind the Roidmude's Over Evolved. But for Heart to achieve it, he has to find a worthy opponent.

After the extraction of Freeze's needles ended, Genpachiro reveals that all of the abduction is truly Makage's work, as the victim's families had no memories of them. But even with that piece of evidence, only one clue left to find (the reason for Makage to kidnap Iwao). Rinna brings the finished antidote and sprays on Genpachiro, finally enabling him to pronounce Roidmude correctly for the first time. Shinnosuke deduces that Freeze is conducting a huge experiment and Nira arrives, as he delivers a list of unused buildings with large consumptions of electricity. Nira apologises to them for what he had done in the past, thus confirming the fact that 001 indeed manipulating the police officers. Chase visits Mr. Belt and advises to help Shinnosuke under the duty of a Kamen Rider. Shinnosuke first visits Toru and tries to help him get his memories back but fails until the dorayaki he bought sometime ago had helped him. When Jun reads Shinnosuke's prediction of the day, he realises that it was the same one back in the day where his father died: Super Unlucky.

Finding the location of an abandoned building with large electricity consumptions, Shinnosuke, Kiriko and Genpachiro storm in and finds all of the kidnapped victims in stasis. Freeze, Brain and Go appears as he reveals that this place is a hidden experiment facility. Ever since 12 years ago, Freeze tries to find the source of his humiliation so he kidnaps people that can withstand his memory manipulation ability like Shinnosuke. Also noted that the great nationwide pandemic that happened 10 years ago was a setup. Shinnosuke and his father was gifted but he wasn't capable of finding the reason why other humans like them can withstand his ability.

Toru soon appears and reveals that it was his father's dream that allows him to retain his memories. After Toru reunites with his father, Shinnosuke concludes that no matter how strong his ability is, they will never reach a person with a higher spirit, awakening Mr. Belt's senses and finally allows Shinnosuke to transform and fights Freeze. Chaser joins the battle as well and fights Deadheat Mach and Brain. While it seems that Drive Type Formula successfully kills Freeze, but his Core survives and creates a new body, which evolves him into Over Evolved State. In this new form, Freeze unleashes a powerful ice burst which takes out Shinnosuke who falls to the ground motionless. Approaching him, Kiriko and Genpachiro are horrified to find that both Shinnosuke and Mr. Belt have been killed.

Kamen Rider Drive Volume 8 features episode 29-32: What Really Happened to the Robbery Event?, Who Reveals the Real Criminal?, Why Did the Important Memories Disappear? and What is Waiting At the End of Evolution? [1] Collection 3 comes with 12 episodes. 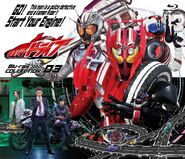 Retrieved from "https://kamenrider.fandom.com/wiki/What_is_Waiting_At_the_End_of_Evolution%3F?oldid=620941"
Community content is available under CC-BY-SA unless otherwise noted.