Goodbye to the E/A Bouquet of Justice to This City

Wakana Sonozaki (園咲 若菜, Sonozaki Wakana), the user of the Claydoll Memory, was the youngest daughter and middle child of the Sonozaki Family. Her role in Kamen Rider W was at first a neutral one, but she later became one of the main antagonists.

Working as a DJ at the Futo's local Wind Wave (ウインドウェーブ, Uindo Wēbu) radio station, she hosted the Wakana's Healing Princess (園咲若菜のヒーリングプリンセス, Sonozaki Wakana no Hīringu Purinsesu) show, which was very popular among the citizens of Futo. Besides frequently broadcasting her hit single "Naturally", Wakana also announces rumors of happenings in Futo in her show. She also travels around Futo for her show, such as in episode 13 and 14 when she wanted to discover the best place for sweets in Futo. Her fans included Philip, Akiko Narumi, Shotaro Hidari (until he discovered her true personality), Mikio Jinno and Sachio Sawada, as well as numerous citizens of Futo. While she puts up a shy and kindly persona on the show, her true personality is the complete opposite. Her stint as the Healing Princess however, was not without problems. In episode 13, she assumed her Claydoll Dopant form to kill a stalker Gaia Memory dealer who attempted to force her to marry him. The same episode and episode 14 featured her being the target of a stalker known as Mr. Question, later revealed to be her manager Tsuyoshi Ageo whom she had abused frequently. Wakana also had problems with another Wind Wave DJ, Motoko Saeki, who used Ageo to try to get rid of Wakana. Motoko found out about Wakana's identity as the Claydoll Dopant, but was killed off by Kirihiko Sudo before she could expose Wakana on air.

In episode 13, Wakana is impressed and takes a liking to Philip. She is very honest with him and is delighted when she catches a glimpse of him appearing in the reality television show Fuuuuuutic Idol alongside Shotaro as the Kamen Singers in episode 23. In episode 24, Wakana also agrees to help Philip catch the Radio Tower Clown by claiming that she wishes to meet the Radio Tower Clown.

Role as member of the Sonozaki Family

Wakana was secretly raised to become the key element in her father, Ryubee Sonozaki's plans for the Gaia Impact after her brother Raito Sonozaki's death. Out of all of the members of the Sonozaki Family, she is the least involved with the Gaia Memory business, as she was doted upon while growing up. After encountering Philip, Wakana begins to have second thoughts about being a Dopant and discards the Claydoll Memory in episode 14. It is returned to her by her father, who is aware that she did not lose it as she claims; he later decides to bring her into the family business after her brother-in-law Kirihiko's death and is the one chosen to view the effects of the Xtreme Memory on the True Gaia Memory. Before this, in episode 26, under her older sister Saeko Sonozaki's request that Wakana be made a perfect Dopant, Wakana becomes one of Dr. Shinkuro Isaka's unwilling experiments after he modifies her Gaia Driver and allows her to be controlled by the Puppeteer Dopant, causing her to attack the Narumi Detective Agency and nearly kill Philip. Isaka also begins subjecting her to more of her Gaia Memory's influence and its short term side effects showing her compatibility with its powers, in an attempt to allow Wakana to reach her full potential as the Claydoll Dopant.

After trying to run away with Philip, her father takes her to the Museum's true base of operations. Believing that she is serving for a greater good for the planet's sake, Wakana now runs the Museum and the Digal Corporation, bent on bringing Philip back to the Museum by any means to fulfill his part in the Gaia Impact. She is also given the Prototype Organic Information Controlling Organ Body Gaia Progressor (有機情報制御器官試作体・ガイアプログレッサー, Yūki Jōhō Seigyo Kikan Shisaku Tai Gaia Puroguressā), a device based on the Xtreme Memory designed to evolve her into the godlike Claydoll Xtreme (クレイドールエクストリーム, Kureidōru Ekusutorīmu) to prepare her for the Gaia Impact so she can become one with the planet's vast knowledge. When the Gaia Impact seems to succeed after Philip is thrown into the source of the true Gaia Memory, becoming a living Gaia Memory, Wakana loses control when Philip is removed from her body, causing an explosion that destroys the Sonozaki estate. However, in midsts of the blaze, Wakana's body is carried off by Jun Kazu to the Foundation X research facility.

When speaking with Neon Ulsland, Kazu reveals that the Claydoll Memory fused into Wakana at a cellular level and is in coma after the incident. He is planning to find a way for Wakana to wake up and reactivate the Memory to proceed to the re-activation of the Gaia Impact. When talking with Ulsland again, Kazu reveals that he plans to transform Wakana into data and place her in one of the Foundation's satellites to put the Gaia Impact on a planet-wide scale. She is equipped with a monitoring device that broadcasts to a device held by Kazu, it monitors her compatibility with the extent of her powers that are activated. When Philip begins to anguish when Shotaro refuses to transform into Double and fight Kazu on his own, Wakana begins to glow. Kazu states it's because her consciousness is connected to Philip and it's causing her compatibility to rise and it would wake her up. After waking up and almost being turned into data, Wakana is rescued by Shotaro Hidari and is taken to a hospital after the defeat of Kazu and the disappearance of Philip.

A few days later, Wakana attempts to force her way out of the hospital to resume her family's goal before finally learning that Philip disappeared into the Gaia Memory. After getting the means to invoke the Gaia Impact from Shroud in her final moments, Wakana sacrifices her own existence to bring her brother back via the Xtreme Memory. She then tearfully said her goodbyes to Philip along with the rest of their family while being comforted by her older sister.

Clay Doll and Clay Doll Xtreme appears as a playable character with the other Heisei and Showa kamen Riders in Kamen Rider Riderbout. 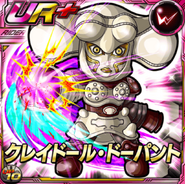 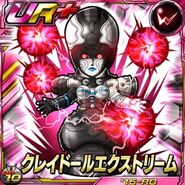 As a member of the Museum, Wakana is able to transform into the Claydoll Dopant (クレイドール・ドーパント, Kureidōru Dōpanto), enabling her to produce gravitational energy shots, as well as the ability to reform her Dopant body after it is shattered into thousands of pieces. Unlike other members of her family she wears the buckle backwards.

After having the Gaia Progressor spliced into her body by the Gene Dopant, Wakana's Dopant form evolved into the god-like Claydoll Xtreme (クレイドールエクストリーム, Kureidōru Ekusutorīmu). While armed with tendrils and exponentially more powerful than the Claydoll Dopant, she becomes a being like Philip with access to the True Gaia Memory, much like CycloneJokerXtreme. Due to this evolution she became unaffected by Double's Prism Break Maximum Drive effect to negate regeneration and can call on this form at will when in her regular Dopant form.

After going into a coma and the Claydoll Memory fused into her at a cellular level, Wakana can use her Dopant powers without assuming her Dopant forms and can teleport.

Claydoll Xtreme concept art
Add a photo to this gallery

Retrieved from "https://kamenrider.fandom.com/wiki/Wakana_Sonozaki?oldid=666754"
Community content is available under CC-BY-SA unless otherwise noted.