Although the Memory Droids are autonomous, they are usually stored in the form of the WArmor's shoulders and chest plate. However, they can be summoned during finishing attacks to perform a triple rider kick in the shape of a W.

The Memory Droid Cyclone consists of the following parts:

The Memory Droid Joker consists of the following parts:

During the events of Kamen Rider Heisei Generations FOREVER, Master of Fumen gives the W Ridewatch to Sougo per Shotaro's wish and rallied all of the Kamen Riders for help in the fight against Tid.

During a scuffle with Kamen Rider Woz, Zi-O transformed into WArmor, summoning the two Memory Droids in the process, who proceeded to attack Woz. After a short while, Sougo attempted to defeat Woz by executing a Maximum Time Break attack but was defeated shortly after executing the attack. Final Answer? 2040

During the disruption of the timeline in which Another Zi-O II ruled, Sougo would use the WArmor to defend Heure and Ora from Another Double. 2019: Tsukuyomi Confidential

After Geiz, Black Woz and Tsukuyomi were trapped in Another World, Sougo would use the WArmor against Kamen Rider Eternal to bait him into using his Zone Maximum Drive, before transforming into Zi-OTrinity, teleporting both combatants to Another World, where Eternal's attack would destroy Another World and freeing everyone that was held captive. 2019: Operation Woz 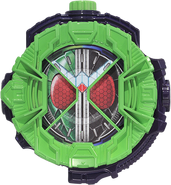 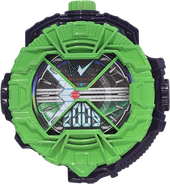