As the brutish Violence Dopant, the user's left arm is strong enough to destroy anything in its path, even enough to smash through cars. They can also compress their body into a wrecking ball-like form called the Violence Ball (バイオレンスボール, Baiorensu Bōru) to cause more collateral damage.

The main user of the Violence Memory was Tsuyoshi Ageo (上尾 強, Ageo Tsuyoshi), Wakana Sonozaki's manager. A weak willed man who loved her in spite of the abuse, Ageo was used by Wind Wave DJ Motoko Saeki in a scheme to force Wakana off the air, giving him the Violence Memory she buys. Overcome by the Memory's influence, Ageo assumed the alias of Mister Question, targeting certain places of value to Wakana and portraying himself as a stalker. Once discovered, he abducted Wakana and was chased after by Kamen Rider Double. Before being defeated by means of LunaTrigger's Trigger Stag Burst Maximum Drive, he led Wakana to Motoko.

Violence Dopant's destruction at the hands of Double (as seen in The Q on the Radio/Live Catastrophe) was shown in a recollection by Amadum as he explained the nature of his world as a paradise for monsters destroyed by the Kamen Riders. The Violence Dopant also appears in the world within the Magic Stone proper as part of the group of monsters that tried to capture the boy and girl along with the Rider Rings they were carrying. They ended up fighting Kamen Riders Wizard and Beast, who also intended to take the Rider Rings to prevent the monsters spilling out into the prime world. The boy proceeded to summon Hibiki, Kiva, and Den-O, then Kuuga, Agito, and Blade to fight both the monsters and Wizard and Beast. When the children called to the sky for help, Kota Kazuraba heard them and appeared in their world as Kamen Rider Gaim. He proceeded to take on all the monsters by himself, finishing them off before introducing himself as Gaim. The Kamen Rider Rings

The Violence Dopant was one of the monsters that appeared in Zi-O's world due to the merging of the worlds caused by Swartz. 2068: Ohma Time 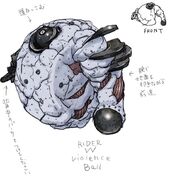 Violence Ball concept art
Add a photo to this gallery

Retrieved from "https://kamenrider.fandom.com/wiki/Violence_Dopant?oldid=663949"
Community content is available under CC-BY-SA unless otherwise noted.