Venosnaker (ベノスネーカー, Benosunēkā) is creature who is contracted to Takeshi Asakura (as Kamen Rider Ouja) in Kamen Rider Ryuki. Together with Metalgelas and Evildiver, it would become a part of the composite monster Genocider.

Venosnaker resembles a giant mechanical cobra. It's able to spit out a thick venom from its mouth at the opponent that melts anything it touches. This monster was also a direct counterpart to Ouja as seen having a vicious and animalistic personality and even attempted to attack its master out of hunger.

Venosnaker was already contracted to Asakura's Card Deck before he became Kamen Rider Ouja. He played a pivotal role in the deaths of both Jun & Tezuka. Because Venosnaker is as tall as Dragreder, they've both fought against each other before on multiple occasions.

After a certain period of time, Venosnaker, who hadn't been fed by Asakura in a while, started to act violently towards him in a breach of their contract. However, Asakura was safely able to feed Venosnaker before it completely killed him.

Near the end of the Rider War, Venosnaker assisted in killing Goro Yura, who had taken up the Zolda deck from Shuichi Kitaoka.

It's unknown what happened to Venosnaker after Asakura died, but it's implied in the end that because the Rider War never happened, Venosnaker and all other Mirror Monsters didn't exist anymore.

Venosnaker first appeared in the film when Asakura summons it to fire its signature acid spit to melt Femme's Wing Shield. Later, he was summoned again when Asakura used his Unite Vent card to combine his monsters into Genocider. Genocider was later destroyed by Kamen Rider Ryuga's Final Vent.

Other known features are the blades on the both sides on his head, Veno Harsh (ベノハーシュ, Benohashu) which can be used in melee combat.

Through the use of certain Advent Cards, parts of Venosnaker's body can be used by Ouja as weapons or other equipment. 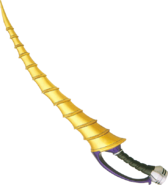 Venosaber
Add a photo to this gallery

Retrieved from "https://kamenrider.fandom.com/wiki/Venosnaker_(Ryuki)?oldid=673498"
Community content is available under CC-BY-SA unless otherwise noted.