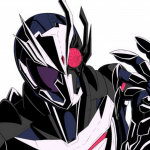 I am an editor of this wiki. I made my first edits on this wiki in October 2013 but didn't become a regular editor until sometime in 2014.

I first got into Kamen Rider when an English dubbed version of Kamen Rider Ryuki came onto my local television station(I don't remember exactly which year was it, but I think it was around 2004). Before that, I had seen other tokusatsu shows on television as well, such as the Chouseishin series and Power Rangers, starting with Gransazers and Power Rangers Ninja Storm

respectively. I was greatly amazed by the Riders' ability to use cards to summon weapons, and besides, it was my first ever Rider season, which was why it left a lasting impression on me. The Riders I liked back then were Ryuki, Knight, Zolda and Ouja.

Later on, I watched Kamen Rider 555 on TV as well, and again was captivated by it. This time round, the Riders used phones to transform. I would go on to watch Kamen Rider Blade as well, but not as much because I was about to start school back then.

As for the Heisei Kamen Rider series, I didn't get around to watching full episodes of the then current seasons Fourze and Wizard. In 2014 when Kamen Rider Gaim was ongoing, I was fascinated by the pictures of the various forms I had seen, and decided to watch a few small clips of the new forms in action. Gradually I went to watching the full episodes themselves. The story kept me hooked, and every week I was eagerly waiting for the newly-subbed episodes to arrive. When Gaim ended, I'd figured it was the best season I had seen. Even the movies and the specials were interesting as well.

I initially had trouble getting used to Kamen Rider Drive as I missed Gaim even after it had ended. However, Drive proved to be as good as Gaim, at least to me. It was the finale which made me feel Drive was slightly better compared to Gaim, as I felt it closed off the main character's story arc much better. Gaim's finale reintroduced a villain from the summer movie, and I felt somewhat bummed by it as the summer movie was not out on DVD yet at the time and by extension a subbed version of the movie so I didn't quite understand what was going on then.

I have since been following the franchise for years now, and I hope to remain a committed fan to the series even as time goes on.

These are pages which I may consider converting into actual articles in the future.

My custom signature which I use on talk pages.

Pages used to test out templates and various page edits.

Pages which I have stopped work on ages ago and may not resume work on anytime soon.

Retrieved from "https://kamenrider.fandom.com/wiki/User:Gokyr586?oldid=612514"
Community content is available under CC-BY-SA unless otherwise noted.