Transform! The Orange from the Sky!?

Transform! The Orange from the Sky!? (変身！空からオレンジ！？, Henshin! Sora kara Orenji!?) is the first episode of Kamen Rider Gaim. It features Kouta Kazuraba's full transformation into Armored Rider Gaim which had been withheld during his initial appearance in the final two episodes of Kamen Rider Wizard, this episode foreshadows a future unknown war, which would be later revealed in the penultimate episode.

While in Zawame's Free Performance Zone, Mai and Mitsuzane of the dance team Team Gaim are having a free-spirited dance when members of rival Team Baron scare them away when an Inves Game gets out of hand. When Mai goes to former teammate Kouta Kazuraba to reveal something strange has happened, he reveals that Team Gaim's leader Yuya gave him a strange Lockseed, and Mai reveals Yuuya informed her of it as well. The two eventually find a way into the Helheim Forest that has appeared in the Free Performance Zone.

"Pluck the fruit of heaven. That the world may be dyed in your image. Is that the glory you seek? Is that burden one you can bear? Know this. The lives of men are not ours to control, not even our own. We cannot defy the inexorable current of fate that carries us. But what if fate itself were to call you... To change the world? To turn the course of the future? You cannot defy your fate. But the fate of the world is in your hands!"
―Opening narration.[src]

In other time and place, at the Free Performance Zone in the planned city of Zawame, the dance group Team Gaim are having a free-spirited dance when members of rival Team Baron demand the stage. Team Gaim's member Mai Takatsukasa accepts the challenge of Team Baron's Zack in settling their dispute with an Inves Game. However, with Peko helping his team cheat, Team Baron gets an advantage when Mai's Inves manifests in reality and runs amok.

Luckily, a former become Team Gaim member named Kouta Kazuraba arrives and sends the monster back, but Team Baron wins by default. Upon meeting with Team Gaim's leader Yuya Sumii, Kouta learns of how the Inves Game is gaining popularity before he returns home to see his older sister Akira Kazuraba, asking her when he will be able to transform.

The next day, Kouta gets a call from Yuya that he has found something interesting. Finding Mai instead, Kouta sees an Inves portal and they find themselves in a forest of Inves and fruit that turn out to be Lockseeds. Upon finding the item that Yuya told him about, a belt like object that the Lockseeds can attach to, Kouta and Mai find themselves running from an Inves.

Realizing that the monster followed them, Kouta decides to distract the Byakko Inves long enough for Mai to escape and get help. Out of instinct, Kouta uses the Orange Lockseed on the belt and transforms to a samurai-like figure before overwhelming the Byakko Inves while quickly learning his arsenal. As they take their fight up a building, Kouta sees a mysterious girl resembling Mai who tells him that he is know bound by fate until he dyes the world in his colors.

With the mysterious girl showing him how to use his belt, Kouta uses the Orange Charge attack to destroy the Byakko Inves. Negating the transformation, Kouta is found by Mai as he realizes he actually transformed. 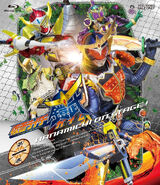 Retrieved from "https://kamenrider.fandom.com/wiki/Transform!_The_Orange_from_the_Sky!%3F?oldid=533768"
Community content is available under CC-BY-SA unless otherwise noted.