Transform! And to the Future

Transform! And to the Future

Hidenori Ishida
Transform! And to the Future (変身！そして未来へ, Henshin! Soshite Mirai e) is the forty-seventh and final episode of Kamen Rider Gaim. It marks the only appearance of Hideyasu Jonouchi as Kamen Rider Kurokage and the return of Kohgane, a villain who appeared in the 37th episode and in the summer film, as Kamen Rider Jam.

Seven months after Kouta and Mai have left and colonized a new planet, all traces of Helheim Forest have been cleared from Zawame City, but a returning threat appears to change things forever. Mitsuzane realizes that Kouta isn't on Earth anymore and that it's up to them to save Zawame City.

Seven months after Kouta and Mai have left the planet, Mitsuzane, after reminiscing about his days with Kouta, watches the dance groups performing together. The Beat Riders ask him to dance with them as well, but he declines and leaves. A grasshopper lands on the shoulder of one of the girl watching the Beat Riders. Takatora is now trying to help the world recover from the Helheim invasion in order to atone for his own mistakes and informs Mitsuzane that he is taking a trip to America in a couple of days. Mitsuzane simply tells his brother than he's fine then leaves.

At Charmant, Takatora and Akira were having a discussion about their younger siblings when a swarm of grasshoppers appear including the same Grasshopper Monster that Kouta and Kaito once fought. Elsewhere, Mitsuzane meets the girl who was watching the Beat Riders from before. Possessed by Kohgane's spirit who returns to enact revenge, she transforms into Armored Rider Jam. However, Mitsuzane does not remember him, since most of the Riders' memories were altered. Oren, Jounoichi, and Zack appear to fight as well, but without their Sengoku Drivers, they are easily defeated. Jam retreats, promising to return to destroy everything that Kouta and the others had fought so much to protect.

Reuniting at Drupers, the Beat Riders are informed by Takatora that after the Helheim Forest disappeared, all Sengoku Drivers and Lockseeds possessed by the Yggdrasill Corporation were disposed of and destroyed hence there is no way to fight their newest enemy. He adds that a new batch of Drivers could be made based on Ryoma Sengoku's blueprints, but there would be no way to find new Lockseeds. Jonouchi realizes that Takatora still has a Sengoku Driver and Matsubokkuri Lockseed for emergencies, and after learning from him about Hase's fate, convinces him to fight Jam in his place. Transforming into a Kurokage Trooper, Jonouchi confronts Jam and the Grasshopper Monster, only to be defeated. However, Mitsuzane appears soon after, and with his Sengoku Driver, transforms into Armored Rider Ryugen. Ryugen drives Jam into a corner, but Jam uses the possessed girl as a hostage, forcing Mitsuzane to cancel his transformation and surrender.

Just as Mitsuzane is about to be killed, Kouta appears to help him, and forces Kohgane to leave the girl's body. Transforming into Kiwami Arms, Gaim assists Ryugen in destroying Jam. Kouta later bids farewell to Mitsuzane, while assuring him that they will always be friends together. Before leaving, Mai and Kouta replanted and revived the Sacred Tree of Zawame City in its original location. Two boys saw the Sacred Tree and showed it to the girl who was possessed by Kohgane earlier, who was their sister. Taking it as a sign of good luck, they practiced dancing under it. As Mai and Kaito's spirit watch the children, Kaito realized how strong Mai and Kouta were. Mai assured him that mankind can find its own way despite all its faults, a relieved Kaito departs to the afterlife, and Kouta leaves with Mai back to the barren planet where they settled, eventually transforming it into a blue world brimming with life.

Shortly after, it was in his hand. 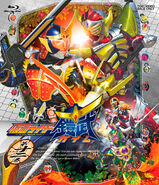