Gentaro and Kengo must find a way to overcome their rift before a powerful Zodiarts defeats both Fourze and Meteor.

During their fight with the Dragon Zodiarts, at Kamen Rider Meteor's urging, Kamen Rider Fourze attempts to use the Magphone against Kengo's wishes, only to accidentally send it flying. Kamen Rider Fourze assumes Elek States to aid Meteor by using their Limit Breaks on him at the same time. The Dragon Zodiarts decides to take his leave with Kamen Rider Meteor following. Gentaro apologize to Kengo, but he doesn't forgive him, so he decides to give his advice to Rumi instead. As Gentaro, Miu, JK, and Tomoko search for the Magphone, Yuki, Shun, and Ryusei attempt to convince Kengo to forgive Gentaro. While Yuki tries to convince Rumi that Gentaro needs him, Kengo's harsh words cause Ryusei to remember his past as he tells Kengo not to say anything he might regret.

By then, the Dragon Zodiarts goes on the attack, again, to seek out Kamen Rider Meteor's human identity before the Kamen Rider arrives to hold off the Zodiarts as Kengo and Rumi run off for the latter's qualifying race. Later, Ryusei manages to persuade Kengo to reconsider apologizing to Gentaro by comparing the two of them to magnets in regard to their intentions of helping each other. Elsewhere, Gentaro arrives to help Yuki's group with Kengo as he finds Jin berating Rumi for having Kengo help her. When Shun arrives on the scene, Jin reveals that he is the Dragon Zodiarts, just as his Zodiarts Switch transforms into its Last One stage. Gentaro transforms into Kamen Rider Fourze to take their fight to the field, when Kengo is hurt in the fray until Kamen Rider Meteor joins in. However, the two Kamen Riders are powerless against their opponent until Miu and the others arrive with the Magphone. Giving Kamen Rider Meteor the Elek Switch to hold the Dragon Zodiarts at bay, Kamen Rider Fourze gives the Magphone to Kengo for final tuning as the two rekindle their friendship.

Using the Magphone, Kamen Rider Fourze assumes the powerful Magnet States to destroy the Dragon Zodiarts with the Rider Super Electromangetic Bomber and switch his Zodiarts Switch off. Giving Kamen Rider Fourze his Elek Switch back, since Gentaro and Kengo are a team once more, Kamen Rider Meteor takes his leave as the Kamen Rider Club realizes Ryusei is no where in sight. Later, in the Rabbit Hatch, Kengo reports about Rumi's progress before he ends up in another argument with Gentaro over Ryusei to his dismay. Meanwhile, after telling Hayami of Jin's failure to evolve, Gamou tells him to speed up the Horoscopes recruitment operation. 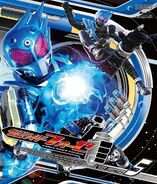 Retrieved from "https://kamenrider.fandom.com/wiki/Transcendent_Magnetism?oldid=527891"
Community content is available under CC-BY-SA unless otherwise noted.