For the past or A.R. World version, see Todoroki (past) and Todoroki (A.R. World).

He is the last Oni to join the main cast of the show. Despite that he is the second oldest Oni of the core three at 26, he is still very much a novice. A green Oni, both in color and appearance, he is still learning how the world around him works. Having only just become an independent Oni during his introduction, he sticks close to Hibiki and Ibuki and looks to them for guidance. Eager to please his master but do things in his own style, he often meets conflicting points of views from others, but continues on with what he believes is "his" way. Todoroki was the last of the main series' Oni to be introduced. He was first seen in episode 13 greeting Asumu's mother at a hospital. He later returned with his master, Zanki, to fend off a pair of Makamou. Originally he was to be the next Zanki, but declined the offer from his master so that he could create his own legacy as Todoroki

When he became a solo Oni, Zanki had some trouble accepting the way that he fought the Oni and his "cleansing" of the battlefield. Eventually Zanki came to accept that this was Todoroki's way of being an Oni. During the summer of training arc, Todoroki saw Hibiki as a teacher, and Hibiki offered Todoroki guidance on being a solo Oni and the new challenges that life would bring him now that he had no master.

Todoroki soon came to find fighting the Oni on his own to be a tough challenge. In response to this, Zanki returned to be his supporter and offer advice whenever he could.

Throughout the series, Todoroki had a crush on Hinaka Tachibana. One day he gathers enough courage to asks her out on a date on her birthday. The date goes horribly wrong for Todoroki, he makes a fool of himself and ruins her gift. Hinaka became upset with Todoroki and the two were distant with each other for a while.

Late in the series after the Shuki incident, Todoroki was literally stepped on by a giant Makamou. This left the others questioning whether or not Todoroki would ever be able to transform again. Zanki feared this would cause Todoroki to go into a state of depression, indeed it does. Zanki believes that Todoroki was born to be an Oni and that he knows no other way of life. Eventually Zanki meets his end, but puts a spell on his soul to allow him to remain on Earth until Todoroki no longer needs him. It was around this time that Hinaka and Todoroki became friends again, even though she offered her help to teach him how to walk again, Todoroki declined. Even when Zanki helped him out, Todoroki said he wanted to do it on his own, otherwise he would never be able to show that he is an independent warrior.

Todoroki learns to walk again and rushes into Zanki's final battle, the both make quick work of a large number of Makamou and soon it is time for Zanki to pass on. Todoroki and Zanki have one final cleansing session as Todoroki pays his final respects to his former master. After these events, Todoroki has finally become the man that he always wanted to be.

Todoroki appears in flashback while the Disks Animal are giving Asumu the knowledges about how to become an Oni. Todoroki is told as an Oni who can controls electricity, he eats much, having meals fit for multiple people.

Kamen Rider Diend summons Zanki, Ibuki and Todoroki to fight against Jyumenki Yum Cimil and Apollogeist in the World of Amazon ,later they were not seen once again.The Strong, Naked, Strong Guy

Kamen Rider Todoroki was part of a group of reinforcement riders led by Akira Date/Kamen Rider Birth to aid the primary riders in defeating the Rock Great Leader. All the Kamen Riders got on their bikes and performed the All Rider Break attack which destroyed the Great Leader. OOO, Den-O, All Riders: Let's Go Kamen Riders

Kamen Rider Todoroki appears when Narutaki says it is not related to that. They comment that it took the costume developers seven test designs to produce the final suit color, which uses a special reflective paint that changes color when the light hits it a certain way. They also state that Maziora is in the design of Ibuki and Todoroki, which was a blue and green variant of the coloring design.Check! Hibiki's Useful Maziora!!

That One! Jun Watanabe: The Identity of Child X?

Kamen Rider Todoroki appears with Sasword, Sasword Masked Form, Dark Kabuto and Ichigo, cited as examples of the costumes I use Jun Watanabe, later in the beginning of the questionnaire and Kenichi asks which Rider is Jun Watanabe referring to five Riders, it is finally discovered that it is Todoroki.That One! Jun Watanabe: The Identity of Child X?

Kamen Rider Todoroki appears with Accel, TheBee Masked Form, and Double Heat Joker. According to Kivat-Bat the 3rd, Todoroki is considered a perfect candidate as a boyfriend.Type13. - Get it! The Smart Device Change!

Type16. - The Destroyer Destroys the Match!

In a stage show where Kamen Riders Hibiki, Ibuki, Todoroki & Zanki are seen fighting their usual foes when Android Hakaider shows up and winds up defeating them. Kikaider, & Kikaider 01 arrive to assist the Riders.

Kamen Rider Todoroki appears in the Nintendo DS/PS Vita game he performer his Ongeki Zan Raiden Gekishin and had a double attack with Zanki in All Kamen Rider: Rider Generation 2.

Kamen Rider Todoroki is an unlockable and playable character with the other and performer his Ongeki finisher in Kamen Riders: Super Climax Heroes.

Kamen Rider Todoroki appears as a playable character with the other Heisei and Showa Kamen Riders in Kamen Rider Riderbout.

Kamen Rider Todoroki appears as a playable character with other Riders and monsters in Kamen Rider Break Joker.

Kamen Rider Todoroki appears as a playable character in Kamen Rider Batton-Line among other Riders in the game.

Kamen Rider Todoroki appears as a playable character with others Kamen Riders in the video game, performer his Raiden Gekishin against his enemies Kamen Rider Transcend Heroes. 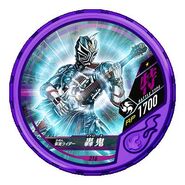 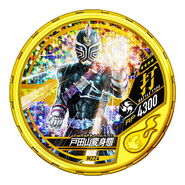 Transformed Todayama Medal
Add a photo to this gallery

It is the seventeenth collaboration pack and the eighth collaboration with the Kamen Rider franchise. CB17 was released in Japan on March 27th 2021. This set included Spirit, Nexus, and Magic cards in all six colors,Tomizo Todayama as Kamen Rider Todoroki appears with other Kamen Riders and Monsters in Battle Spirits.

Todoroki is a 26-year-old Oni, the second oldest Oni of the main Oni trio introduced. Although at 26, Todoroki is a very childish personality, he does not want to do anything difficult that he does not like, but when he knows it is useful, he is willing to participate. He eats very well, with him eating is very important to provide energy for fighting. He is very clumsy in communicating with others and often apologizes for fear of doing something wrong.

To him, Zanki was always the master he admired. He felt very sorry when Zanki gave up being Oni and always wanted Zanki to come back to fight with him. In the free time, Todoroki often goes to Zanki to talk and talk. After the death of his master, Todoroki was very sad, but that was the motivation for him to be mature, stronger and want to fight Zanki's part.

Todoroki has a special affection for Hinaka Tachibana. But he was lacking in tact and didn't know how to show his feelings. That makes their relationship comical. However, both people are always interested in each other. Their feelings are sometimes childish but sincere and profound. As an Oni, Todoroki always works seriously. He has been hardworking and aggressive since becoming an independent Oni. Todoroki often participates in supporting other Oni when they encounter difficulties. He always thought to work more when other members are struggling for their important mission.

In his first battle, Todayama used a practice Ongekishin named Reishiki (零式, Reishiki) on his belt instead of a proper one. His wristbands and anklets also do not feature strings yet. This form is deemed Transformed Todayama (戸田山変身体, Todayama Henshintai), do to him not having an Oni title yet.

In this form, Todoroki is a green demon. This is his basic form and the easiest form for him to reach. To become this form, Todoroki simply needs to pluck his brace strings, the vibrations from the strings cause his body to be hit by massive lightning bolts, changing him into his Oni form. Todokori also gains a second "oni face" which is a crest that forms on his forehead. Unlike most Kamen Riders, Todoroki does not wear a suit; rather, his demon form is his true form.

Ongeki Zan: Raiden Gekishin (音撃斬・雷電激震, Ongeki Zan: Raiden Gekishin Sound Attack Slash: Thunderbolt Exciting Quake) Todoroki stabs his weapon into the body of a large Makamou and changes it into its guitar form. He plays the guitar in a wild and fast manner. By doing this, the vibrations of his weapon are directly transmitted to all the organs of the Makamou, causing it to explode.

Todoroki's no Ongeki Da
Add a photo to this gallery 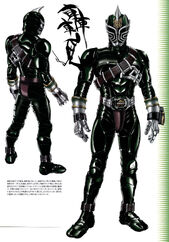 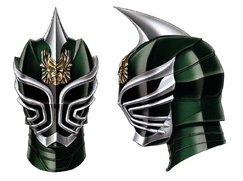 Retrieved from "https://kamenrider.fandom.com/wiki/Tomizo_Todayama?oldid=697627"
Community content is available under CC-BY-SA unless otherwise noted.