The Weaponry Hero (兵器のヒーロー, Heiki no Hīro) is the sixteenth episode of Kamen Rider Build. It features the debut of Build's KaizokuGatling Form. Kamen Rider Grease makes a brief appearance in this episode, after his appearance in Kamen Rider Heisei Generations FINAL: Build & Ex-Aid with Legend Riders, as well as Akaba, Aoba and Kiba.

Gentoku’s words brought doubt to Sento’s ears! The fact that Sento is actually the demonic scientist himself has really brought him down. He keeps repeating to himself that he was the one who experimented on humans and created the monsters called Smash. Sento starts to fill with guilt. However, Ryuga speaks his mind. He knows he cannot continue to fight alongside him if he knows he was the scientist behind the technology that killed his girlfriend. Ryuga summons Sento to him by saying… “Fight me”… 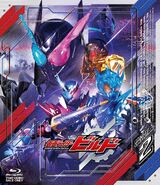 Retrieved from "https://kamenrider.fandom.com/wiki/The_Weaponry_Hero?oldid=494240"
Community content is available under CC-BY-SA unless otherwise noted.