The Warrior's Awakening (戦士の覚醒, Senshi no Kakusei) is the first episode of Kamen Rider Agito.

To take preventive measures against further atrocities caused by the Unidentified Life Forms, the police introduce the G3 unit. But when it is time to fight the murderous Pantheras Luteus, the G3 falls short to the power of Agito.

The episode begins with a man's voice-over coming from an old, discarded radio that an old man finds at a beach littered with garbage. He and another man are cleaning up the beach when the old man's young grandson, Daigo, finds a strange machine washed up on the shore. He plays around with the machine before his grandfather pulls him away. But then, the machine begins to activate...

Meanwhile, police officer Makoto Hikawa enters a training room dressed in the G3 Kamen Rider unit, supervised by several fellow and superior officers. The G3 is put under a series of tests to examine the capabilities of its uniform. While wearing the G3, Makoto demonstrates supreme aiming skills and reflexes, which impresses his superiors. After the tests are done, Makoto leaves to meet up with Sakiko Mikumo in the O-Parts Research Department. Sakiko shows him a strange machine that was previously found at a beach. Sakiko describes the machine as a "super ancient puzzle" that the scientists are currently trying to unlock.

At the Bunkyou District Tachi Ooba Middle School, a female student, Shouko, is playing volleyball with her friends when she misses and the ball rolls off. She retrieves it, but also finds a blood-spattered pair of glasses on the ground. Her discovery inevitably leads her to find the corpse of a adolescent boy hanging from a tree. The girls scream in horror and run away.

At Shirokita College, Professor Yoshihiko Misugi discusses with a student over his essay thesis regarding the possibility of humans possessing psychic powers - namely ESP (Extra-sensory Perception). Shoichi Tsugami comes in and gives Dr. Kuneida the books he needs, and informs him he's cooking dinner tonight. Yoshihiko explains that he's having takeout for dinner, and Shouichi leaves.

Outside, Ryo Ashihara arrives on his motorcycle and encounters Shouichi on the stairs where a few students are practicing for band. They pass by each other, though Ryo watches him unnoticed as Shouichi rides off on his motorcycle.

Shouichi later meets Mana Kazaya, and they engage in a conversation. Mana asks if he remembered anything yet, but Shouichi tells her he prefers to focus on the present. He feels disturbed by the possibility of discovering he's really an evil criminal one day. Mana tries to cheer him up by saying that if Shouichi's true identity is a wealthy person, then he'd go and marry her. She rides home, and Shouichi muses that it'd be better for him not to remember anything at all

Ryo is practicing some exercises at the swimming pool when he is found by his coach, who tells him that swimming practice had long ended. Ryo's coach advises him to take a break every once in a while. When the man mentions a car accident that Ryo had been in some years ago, Ryo looks unhappy, but requests that his coach let him swim one more lap.

At the police department, Makoto talks with G3 engineer Sumiko Ozawa about what happened at the Bunkyou District Taichi Ooba Middle School. He says he feels bothered that the boy who died was put there at the school for some reason when he shouldn't be there at all.

At the home of the Saeki family, a woman, Saiyuki, helps her husband prepare for work when she finds a strange red cloth fluttering from a tree. The cloth is worn by a strange monster who is hiding nearby, and he mystically causes the machine studied by the O-Parts Research Department to act strangely by letting out a high-pitched noise.

At Shirokita College, Ryo participates in a school swimming competition when he is stricken by a strange noise and he nearly drowns in the pool. At the home of Professor Yoshihiko, Shouichi is cleaning when he hears the strange noise, too, causing him great pain. Meanwhile, the strange monster ambushes Saiyuki's husband and strangles him to death. His corpse is later found hanging from a tree by Saiyuki, who screams in horror.

The police later arrives at Saiyuki's house, now a crime scene. It is learned that the dead young boy found at the Bunkyou District Taichi Ooba Middle School is Saiyuki's son. With her son and husband both dead, she is now the only surviving family. Full of grief, Saiyuki runs off when Makoto attempts to question her about the murders. A police detective confronts Makoto and believes that the "Unknown", as dubbed by Makoto's "Counter Unidentified Lifeform Squad", is nothing but an elaborate trick. Makoto angrily retorts that he was once a cop, and it's his job to investigate the murders.

At the hospital, Ryo is put on life support, having had nearly drowned. His swimming coach tells the doctor that he normally wouldn't try to exert himself before a match. Unbeknownst to them, Ryo's hand twitches to life.

At Professor Yoshihiko's home, Shouichi helps Taichi Misugi, Yoshihiko's young son, pull out a daikon radish from the vegetable garden. Taichi comments on how large it is. Mana comes out and remarks that Shouichi's true identity is a farmer. Shouichi laughs at the possibility and jokingly tells her "No".

At the police department, Makoto receives a call from Saiyuki, who has some information regarding the murders. While waiting for Makoto, she is being unknowingly stalked by the monster who killed her husband and son. The monster produces a noise that causes both Shouichi and the hospitalized Ryo great pain upon hearing it once again, and strangles Saiyuki to death. Makoto finds Saiyuki's purse and finds a photo of a man inside. He also finds Saiyuki's body hanging from a tree, when he realizes he's being watched.

Makoto is found and confronted by the Jaguar Lord Pantheras Luteus, but he is spared and tossed aside. He calls Sumiko and tells her to send him the G3 uniform, as he is being engaged in battle with an Unknown. Despite not having official authorization, Sumiko sends Makoto the suit anyway. Meanwhile, Makoto tries to shoot Pantheras Luteus with a fire arm, but the monster stops the bullets with telekinesis and runs off.

Makoto finds the police cargo van carrying G3 and gets in. Sumiko and her partner help Makoto put on the uniform, and he rides off on the Guard Chaser, a police Turbine Superbike. He pursues the fleeing Pantheras Luteus until he finds the monster on an unidentified street. Using a special G3 rifle, Makoto fires at the Pantheras Luteus, but once again it proves to be ineffective. Both police officer and monster engage in physical combat, with Makoto's G3 uniform being severely damaged during the fight.

Just when all hope seems lost, a new figure enters the battle and fights Pantheras Luteus with ease. The masked fighter, Kamen Rider Agito, enters its powered-up Ground Form and uses a diving kick to defeat Pantheras Luteus, who explodes. Unbeknownst to Agito and Makoto, who had been watching the whole thing, they are witnessed by two other monsters similar to Panteras Luteus, who repeat the name "Agito". 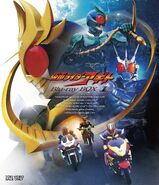 Retrieved from "https://kamenrider.fandom.com/wiki/The_Warrior%27s_Awakening?oldid=597168"
Community content is available under CC-BY-SA unless otherwise noted.