The W Search/Two Detectives in One (Ｗの検索／探偵は二人で一人, Daburyū no Kensaku/Tantei wa Futari de Hitori) is the first episode of Kamen Rider W, introducing the series' setting of Futo City as well as Shotaro Hidari and Philip, revealing their transformation following Double's first appearance in Kamen Rider Decade: All Riders vs. Dai-Shocker. It is the first part of the 'W' arc, W standing for (Kamen Rider) W, Windscale and Word.

Akiko Narumi arrives in Futo to be the landlord of the "hard-boiled" detective Shotaro Hidari, who finds himself involved in a case involving a former female love and a Dopant on the attack.

In the city of Futo, detective Shotaro Hidari has an unpleasant visit from his new boss Akiko Narumi, who has just arrived after learning that her father has gone missing one year ago. As Shotaro learns of the girl's relation to his mentor and boss, hiding what became of him, his childhood friend Marina Tsumura arrives in need of his help in finding her boyfriend Yousuke Togawa. Taking the case, with Akiko tailing him against his will, Shotaro learns from his best friend Police Senior Detective Mikio Jinno that the Windscale building Yousuke worked at has been destroyed by a fiery Dopant. Akiko's initial curiosity turns into terror when she and Shotaro are attacked by the Magma Dopant. Later that night, staying in spite of being told to leave and dead set on evicting Shotaro, Akiko ends up stumbling onto a secret room where she meets Shotaro's partner Philip, before she unintentionally has him focus on takoyaki instead of the Dopant.

As Shotaro explains the Dopants to be humans to become monsters through Gaia Memories, Philip finally finishes his search on takoyaki resumes his research as he accesses the Gaia Library to put the pieces together before Shotaro heads out. Shotaro finds Yousuke, approaching him to have him return to Marina. However, thinking he works for Windscale, Yousuke transforms into the Magma Dopant to attack Shotaro. He calls Philip, who uses the Cyclone Memory in his own belt, which travels with his soul to Shotaro's Double Driver, allowing him to transform into Kamen Rider Double.

He battles the Magma Dopant as CycloneJoker before changing into LunaJoker to use his limb-stretching powers to overpower the Dopant. Double then changes back into CycloneJoker to execute the Joker Extreme, destroying the Magma Memory and returning Yousuke back to normal. However, before he can do anything else, Yousuke is taken by the T-Rex Dopant. Double summons the RevolGarry with Akiko and Philip's body inside. 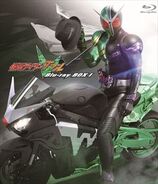