The Truth of One-Seventh

The Truth of One-Seventh (7分の1の真実, Nana-bun-no-Ichi no Shinjitsu) is the twenty-second episode of Kamen Rider Gaim. This episode marks the debut of Gaim Jimber Cherry Arms.

The Crack at Yggdrasill's lab causes more and more Cracks to appear throughout Zawame. Kouta believes the solution is to close Yggdrasill's Crack before any more Inves can attack. However, Kouta encounters Ryoma and Yoko waiting for him in Helheim Forest, ready to stop him so their plans may continue.

Kouta and Mitsuzane discuss what he learned from Sid about the Scalar System when Mai informs them that a Crack is opening in the middle of a bridge in plain sight. To prevent it from being revealed to the public, the bridge is isolated but certain that the Yggdrasill Corporation will incinerate the city should an Inves pass through it, Kouta and Mitsuzane decide to stand guard on the other side of the Crack in Helheim Forest to ensure that will not happen. On their way to the Crack, the duo meets Kaito who refuses to assist them, despite knowing the situation, and finds that Ryoma and New Generation Rider Marika are already defending the Crack with a squad of Kurokage Troopers.

Mitsuzane then claims that he must return to protect Mai and the others, leaving Kouta to assist the Yggdrasill Corporation by himself, confronting the incoming Inves along with Marika as Gaim Jimber Cherry Arms. During the battle, Ryoma reveals that his research is almost complete, as for mankind to survive the invasion of Helheim Forest, the Sengoku Drivers must be mass produced and distributed to each one of them as part of the Project Ark initiative. However, they only have the resources to assemble around one billion Drivers, and the rest of the human poplulation must be put down before that happens. Meanwhile, Mitsuzane approaches Mai and the others and attracts them to one of Yggdrasill's underground shelters by deceiving them into believing that he has found a new free performance stage.

Once the Crack is closed, Kouta immediately breaks his alliance with Yoko and Ryoma and steals the Peach Energy Lockseed from her, fleeing to the Crack that leads to Yggdrasill Corporation's headquarters. Upon discovering that Gaim has broken in, Takatora transforms into Zangetsu Shin to confront him. When Gaim, as Jimber Lemon Arms, accuses Zangetsu Shin of preparing a genocide, he claims that it is all for the sake of mankind's survival and just like him, he is forced to kill others to ensure their survival.

In that moment, Takatora stops fighting and reveals the truth about Yuya to Kouta, who finds out that he killed his own friend, falling to his knees in shock and despair. 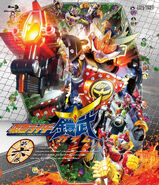 Retrieved from "https://kamenrider.fandom.com/wiki/The_Truth_of_One-Seventh?oldid=492558"
Community content is available under CC-BY-SA unless otherwise noted.