The Truth Behind the Christmas Game

As the Lockseed gathering "game" begins, Baron and Bravo fight between themselves, while the white Armored Rider, Kamen Rider Zangetsu, investigates the infiltration into Helheim Forest. Meanwhile, Kouta, who has also entered the forest, decides to track down the white Rider and finds the base of operations that may be the cause for the tears into Helheim Forest opening on their own.

Having transformed into the white Armored Rider, Armored Rider Zangetsu, Takatora is given the task to drive out the Armored Riders. As the Lockseed gathering "game" begins, Baron and Bravo fight between themselves, while Ryugen decides to look for the white Armored Rider. Having arrived, Kouta finds Zangetsu defeating Gridon and follows the white Armored Rider's supporters to a camp site surrounding a dimensional portal that is referred to as a crack. Posing as a researcher, watching the white Armored Rider defeating Baron and an awe inspired Bravo, Kouta learns of Helheim Forest's name and that Yggdrasill have been using the Inves Game and the Armored Riders for testing. Furious at learning this, Kouta sees Ryugen facing Zangetsu before he transforms to hold off the horde of Inves that are attacking the camp. At a same time when he is about to defeat Ryugen, Zangetsu receives a call of the Inves attack and finds himself forced to destroy Kurokage's Sengoku Driver when the Armored Rider bars his way. It was at that time that Ryugen learns that Zangetsu is his brother. Being alerted to the chain of events, Ryoma orders the building's hologram system to be activated as the Inves begin to surge into the world. Luckily, finding a Suika Lockseed, Gaim dons the Suika Arms and takes out invading Inves with Ryoma's help. While Takatora is disgusted by the turn of events, Ryugen found a box of Lockseeds in the camp ruins that makes Team Gaim the winners of the Lockseed hunting game. Later, him and Mitsuzane arriving to Drupers to give Sid the Lockseeds, Kouta tells the Lockseed Dealer that they are not anyone's pawns. During a Christmas performance by Team Gaim a voice-over by Kouta tells the viewers that although he didn't realize it at the time that's when things started locking into place and they had all already sealed their own fates. Although they'd desired power to help them grow up, it was the coming war that would end up doing that for them. 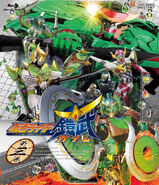 Retrieved from "https://kamenrider.fandom.com/wiki/The_Truth_Behind_the_Christmas_Game?oldid=533143"
Community content is available under CC-BY-SA unless otherwise noted.