Kyohei Yamaguchi
The Trap of Project Build (プロジェクトビルドの罠, Purojekuto Birudo No Wana) is the ninth episode of Kamen Rider Build. It features the debut of Build's LionCleaner Form and the Lock Fullbottle. It also gives a sneak peek at Build’s SmaphoWolf Form.

The secret data entrusted by Takumi Katsuragi revealed the contents of a file known as “PROJECT BUILD”. Katsuragi’s picture was within it, including his own research data on the system operations of the Build Driver. But why was Katsuragi, the founder of Faust, creating the Build system? There is an intense conflict developing between Sento and Ryuga, over if Build’s existence can be considered as “justice” or as a “weapon”…

Comparison of Build and Takumi. 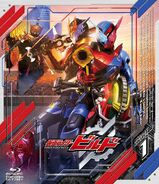