Takeshi Hongo continues participating in races even after being transformed into a cyborg with the hopes of winning world races.

In order to increase the number of people in the Shocker organization, the Bat Man is sent out to infect the world with its virus which turns people into mindless vampires.

A woman named Miho Yamano, upon being dropped off at her apartment complex, hears a maniacal laugh, then a voice proclaiming that she has been "chosen". She immediately rushes into her apartment, to find her bedroom window open. She then finds Bat Man perched at the corner of the room, who then bites her.

Takeshi Hongo, despite his cyborg conversion, is still practicing motocross racing. After winning, Miho arrives to present him with a bouquet and a kiss. Takeshi then notices fangs protruding from her mouth, and struggles with her before she dies.

Meanwhile, another woman has been infected by Bat Man's virus at Miho's building. Before she can infect her husband, Takeshi arrives to hold her off. Unknown to him, several other infected people are also at the building. Takeshi finds Bat Man in Miho's apartment, who reveals to him that the building is actually Shocker's laboratory for human experimentation, used for testing a virus to be propagated in humans. Bat Man escapes, then sics his subjects on Takeshi, who jumps out of the apartment to transform and battle Bat Man at the rooftop. While they battle, the Great Leader of Shocker announces to his grunts that Bat Man's signal has fizzled away, due to his defensive self-hypnosis.

Ruriko Midorikawa is questioning Tobee Tachibana at Snack Amigo. He claims to not know where Takeshi is, and upon receiving a call from him, promptly hangs up. After Ruriko leaves, Tachibana calls him again while Ruriko overhears, revealing that Takeshi is at Jounan University. There, Takeshi analyzes a blood sample from one of the victims, where he and his colleague Kishimori find out that Bat Man's virus is sentient and responds to infrasonic waves upon reaching the brain. Takeshi asks Kishimori to make an antidote, but he calls the matter "out of the question".

Upon leaving Jounan, Takeshi is pursued by Ruriko and Hiromi on his way to Snack Amigo, but by the time they get there, he has already gotten away. Ruriko then follows Takeshi's trail.

At Shocker's lab, Takeshi and Tachibana investigate the scene, where Takeshi declares his intent to save the victims and leaves Tachibana to look after them. Ruriko, still believing that Takeshi is in the room, accidentally knocks Tachibana out with a glass vase, awakening one of the infected. Ruriko questions him, who claims to have evidence that Takeshi killed her father. After she sets him free, the infected bites her, making her scream and alerting Takeshi to her presence.

As Tachibana awakens, Takeshi finds Bat Man holding Ruriko hostage while he reveals the truth about Professor Midorikawa's death. Takeshi questions him about a cure to the virus, to which Bat Man demonstrates the cure lies in his wing's claw.

Bat Man flies to the rooftops, where, with a few Shocker Combatmen, he battles a transformed Takeshi. At the end of the battle, Takeshi kills Bat Man with a Rider Throw. Back at the apartment complex, Takeshi cures the victims by piercing them with Bat Man's torn-off claw. Now forgiven by Ruriko, he rides off on the Cyclone to carry on his fight against Shocker. 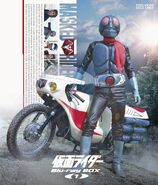 Retrieved from "https://kamenrider.fandom.com/wiki/The_Terrifying_Bat_Man?oldid=683506"
Community content is available under CC-BY-SA unless otherwise noted.