The Reverse Side of a Popular Model

The Reverse Side of a Popular Model (人気モデルの裏側, Ninki Moderu no Uragawa) is the thirty-fourth episode of Kamen Rider Wizard.

While Haruto and Rinko send by Kizaki to investigate Gremlin's human identity as Sora, Nitoh and Shunpei help save a young woman attacked as a possible Gate, only to discover that she is their favorite fashion model Chiaki. Meanwhile, Gremlin is acting stranger than usual...

Rinko and Haruto are called by Kizaki, who shares with them some pictures of the man who gave him the Magic Stone that was in his possession, and the pair recognizes that the man in question is Gremlin. Nitoh and Shunpei witness a young woman being attacked by the Phantom Argus and while Shunpei takes her to safety, Nitoh confronts the enemy, which ends up being forced to flee. They later discover that the woman they helped on is none other than their favorite fashion model Chiaki Shimizu.

With Chiaki being targeted by the Phantoms, Shunpei and Nitoh offer themselves as bodyguards to protect Chiaki who insists to keep working despite the risks. Meanwhile, Haruto and Rinko question a hairdresser about Gremlin and learn that his original name was Sora Takigawa and he was working under him until the night of the eclipse, disappearing soon after along his clients as well. Haruto then realizes that for some reason, Gremlin is different from the other Phantoms as he behaves just like his former self. While watching over Chiaki, Nitoh and Shunpei find that she is not the lovely lady they believed her to be, as she is only focused on her work, with no consideration for anything else and a photographer sent to take pictures of her is attacked by Argus, and soon after, Chiaki is approached by a man who takes his place. Rinko and Haruto continue with their search until Gremlin himself appears before them, claiming that despite being turned into a Phantom, he is still the same person inside, and insists to called by his human name Sora, before leaving. Soon after, Haruto is called by Nitoh who finds that Chiaki is missing.

After taking some pictures of her in a separate location, the photographer reveals himself as Argus and prepares to destroy her appearance to drive her into despair until Nitoh appears in the nick of time to rescue her, with Haruto appearing soon after to assist him. However, Argus sends some Ghouls to keep the two Kamen Riders busy while he attacks Chiaki, until Gremlin, who was watching the situation from afar, stands between them to protect her. Argus then fights Gremlin instead and sends him to a huge fall into the water and decides to flee. Leaving Chiaki under Nitoh's care, Haruto assumes Kamen Rider Wizard's Water Style and jumps into the water to rescue Gremlin. 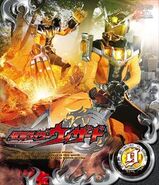 Retrieved from "https://kamenrider.fandom.com/wiki/The_Reverse_Side_of_a_Popular_Model?oldid=492178"
Community content is available under CC-BY-SA unless otherwise noted.