The Red and Blue Kikaider

The Red and Blue Kikaider (赤と青のキカイダー, Aka to Ao no Kikaidā) is the thirtieth episode of Kamen Rider Gaim. It is the debut of Kurokage Troopers's Suika Arms.This episode is a crossover between Kamen Rider Gaim and Kikaider to promote Kikaider REBOOT. It also features a non-Rider form for Ryoma Sengoku as Hakaider.

This is the first episode that is not written by series head writer Gen Urobuchi.

Kouta and Mai meet a young man who can remember nothing about himself other than his name, Jiro. During a rain storm, Kota tries to pull Jiro out of the rain, but noticed his hand feels like metal instead of skin, bringing up the question if Jiro is a robot. Elsewhere, Ryoma looks over the schematics for an android developed by a colleague. Its model name is Hakaider.

Two weeks prior to Demushu entering the human world, Kouta and Mai come across a strange street performer that they later learn is an immobilized android. But once he is hit by lightning, the android regains mobility as Kouta and Mai take him to the garage where they notice a Reboot button on his back. Upon learning that the android is named Jiro and has no memory, Kouta decides to help him find his purpose. After convincing his sister to let Jiro stay them, Kouta tries to help Jiro before fighting off a Goat Inves attacking people. Watching Gaim fight the Inves stirs feelings in Jiro as he drives the monster off, causing him to remember that there is someone he must protect but does not want to remember as he does not wish trouble. After being called by Zack, Kouta finds Kamen Rider Knuckle fighting another android. After learning that Ryoma Sengoku has transplanted his brain into the android body of Hakaider, Gaim learns that Jiro is a battle android called Kikaider.

After researching Dr. Komyoji and the mysterious events of his death, Kouta tells Jiro of what he has learned while thinking that the Reboot button could restore his memory. But Jiro refuses to restore his memory out of fear that he may become a threat like Hakaider. Later while watching Gaim fight, Jiro is attacked by Sengoku-Hakaider. Once the fights mingle, Jiro decides to be Rebooted and transforms into Kikaider while Gaim equips Kachidoki Arms before they destroy the Inves after driving Sengoku-Hakaider off. Upon finding that Jiro no longer remembers him as the result of the Reboot, Kouta sees the android off as he leaves to fulfill his programming. At that time, still horrified of the android's programming influencing him, Ryoma is curious of what purpose the brainless Haikaider serves for his colleague in the DARK organization. 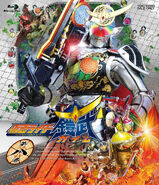 Retrieved from "https://kamenrider.fandom.com/wiki/The_Red_and_Blue_Kikaider?oldid=625331"
Community content is available under CC-BY-SA unless otherwise noted.