The Promise to Defend

The Promise to Defend (守り抜く約束, Mamorinuku Yakusoku) is the eleventh episode of Kamen Rider Wizard.

While hunting down Gargoyle and having to deal with Kizaki, Kamen Rider Wizard appears to fall into a trap set up by Phoenix.

Asking Kizaki to let him talk to Naoki for a bit, Haruto learns the youth's reasons before Kizaki tells him that he will look after Naoki from now on. Later, after checking up on Wajima and learning that only one with magic like Haruto can use a Magic Ring, Kizaki sets up a decoy operation to keep the Phantoms' attention on him.

However, fighting a losing battle against the Ghouls, Kamen Rider Wizard Hurricane Style arrives to wipe out the monsters. Suddenly, Phoenix arrives and overpowers Wizard in Hurricane and Water Styles before "Naoki" is unmasked as Kizaki's aide. Confronting him about it, Haruto learns that Kizaki made a promise to Katayama to keep his son safe as he attempted to kill Gargoyle after the Phantom received order to create a Phantom from Naoki.

However, Medusa expected Kizaki's plan as she Gargoyle wait long enough for her suspicion to be correct when Naoki is about to be taken. Using the Plamonsters to hold Gargoyle at bay, Rinko takes Naoki to safety before the Phantom catches up to them. Once knocking Rinko out, Gargoyle reveals that he killed Naoki's father when he attempted to stop him.

This causes Naoki to blame himself as he begins to fall into despair as Haruto arrives with Kizaki, transforming into Wizard while Kizaki tends to Naoki and tells him not to give up. But as Naoki begins to crack, Wizard becomes Kamen Rider Wizard Flame Dragon to destroy Gargoyle before entering Naoki's Underworld to exterminate the youth's inner Phantom, Jörmungandr.

Later, Kizaki sends Wajima back to Omokagedo with the magic stone as his way of affirming Haruto as an ally. 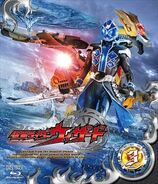 Retrieved from "https://kamenrider.fandom.com/wiki/The_Promise_to_Defend?oldid=492153"
Community content is available under CC-BY-SA unless otherwise noted.