After escaping the clutches of the Yggdrasill Corporation, Kouta wonders why all three of them were able to escape so easily, knowing how Ryoma Sengoku was interested in them. Later, Mai and Chucky continue to try to convince other teams to end the Inves Game, but they instead witness an Elementary Inves robbing a jewelry store. Meanwhile, Takatora has shown Mitsuzane a horrible scene hidden within the Helheim Forest and revealed that he easily beat Kouta.

Ryugen escapes from the Yggdrasill Corporation complex while Gaim and Baron evade their pursuers as well and return from the Helheim Forest. Later, Kouta and Mitsuzane visit Rat in the hospital, happy that he is not infected by the Inves disease, and learn that Mai is trying to end the Inves Games. Meanwhile, Takatora confronts Sid over Mitsuzane becoming an Armored Rider, the Lockseed Dealer feigning ignorance, and after he leaves, Ryoma reveals that while intrigued about how Kouta and Kaito escaped, someone has stolen some of his equipment. Mai and Chucky walk through town, discussing how everything has changed since the start of the Inves games, when they hear an alarm go off and discover that a jewelry store has been robbed by an Inves. They follow the Inves and discover that Team Red Hot is controlling it. Sonomura reveals to them that the Beat Riders have begun jailbreaking their Lockseeds to use their Inves outside of the games and sends his Inves against them, but Kaito appears in the nick of time to rescue them. Meanwhile, Mitsuzane returns home to see Takatora in his room watching the video of Yuya's transformation. Mitsuzane confronts his brother, who commends him for choosing to follow his own path and decides to reveal all the truth to him. Back in the garage, Kouta tries to figure out how to use the Lemon Energy Lockseed with the Sengoku Driver with no success, until Mai arrives to reveal what has happened to her. Kouta confronts Sonomura about the robbery, but he simply offers an alliance between Team Gaim and Team Red Hot. Kouta refuses, and Sonomura reveals that Sid had made him an offer to take back Kouta's Sengoku Driver, and uses a jailbroken Mango Lockseed to summon a Lion Inves to attack him. During the fight, the Mango Lockseed begins to short out, causing the Lion Inves to go rogue, growing wings in the process. Gaim manages to save Sonomura from being killed by the Inves, before it escapes and starts attacking civilians. When the Lion Inves knocks the Rider Indicator off of Gaim's Sengoku Driver, Gaim attempts to place the Genesis Core in the empty space, and successfully activates the Lemon Energy Lockseed in tandem with the Orange Lockseed, transforming him into Gaim Jimber Lemon Arms, easily destroying the Lion Inves with the Sonic Arrow and energy from both Lockseeds. In Helheim Forest, Mitsuzane is horrified when he is shown by Takatora what he claims to be the forest's darkest secret, and he agrees to work with his brother to conceal it from the public. At Drupers, Kouta thinks over everything that has changed, and Bando encourages him that change happens for a reason, until Rat arrives, now discharged from the hospital, much to his joy.

Kamen Rider Gaim Volume 4 features episodes 13-16: Gaim and Baron, Tag of Friendship!, The Secret of Helheim's Fruits, The Man Who Developed the Belts and The New Arms! Jimber Lemon is Born! [1] 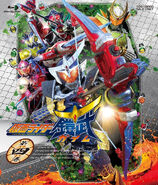 Retrieved from "https://kamenrider.fandom.com/wiki/The_New_Arms!_Jimber_Lemon_is_Born!?oldid=523443"
Community content is available under CC-BY-SA unless otherwise noted.