The Mt. Rokko Pursuit of the Monstrous Gadflygomez!

It is the last episode to feature the theme Kamen Rider no Uta, which served as the series' ending theme since the first episode. It would be replaced by Rider Action as ending theme starting next episode. 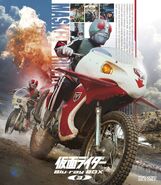 Retrieved from "https://kamenrider.fandom.com/wiki/The_Mt._Rokko_Pursuit_of_the_Monstrous_Gadflygomez!?oldid=574357"
Community content is available under CC-BY-SA unless otherwise noted.