The Miracle of Christmas

The Miracle of Christmas (クリスマスの奇跡, Kurisumasu no Kiseki) is the sixteenth episode of Kamen Rider Wizard.

Around Christmas time, Misa locates a new Gate in the form of a young man with a Yankee fashion sense named Tatsuro, and Haruto must get to the bottom of what his hopes are in order to protect him from becoming a Phantom.

With Koyomi taking him to where she found the blue Magic Stone, Haruto feels an evil presence watching them from afar before they return to the city and find Rinko in a Santa outfit as part of a mandatory police program. Alerted to a Phantom attack and coming to the aid of blond-haired man chased by Ghouls, Haruto transforms into Kamen Rider Wizard to take out the grunts.

Despite being informed about his situation at Omokagedo, the blonde-hair man named Tatsuro ignores their warnings and leaves while claiming that he has something to do by Christmas Eve. Haruto keeps watching Tatsuro close as he engages in several part-time jobs before stopping to rest as he watches over an orphanage. Haruto questions him about Tatsuro about his connection with the orphanage, but he refrains from answering and leaves. The owner recognizes Tatsuro as he leaves and reveals to Haruto that he was one of the orphans raised there, but he fled after involving himself in trouble some years ago.

As Haruto hears about the mysterious gifts left at the orphanage in previous Christmases and realizes that they were Tatsuro's doing, he goes after him, just to find him with several gifts he bought with all the money he got. Realizing that it was the gifts that he brings to the children that bring him hope, Phoenix appears before them and destroys the gifts, driving Tatsuro in despair as he fights Haruto. In the end, Haruto defeats Phoenix once more by combining Kamen Rider Wizard Water Dragon's Blizzard magic with a Slash Strike which freezes him before being shattered into pieces. After Haruto dives into Tatsuro's Underworld to defeat his inner Phantom Hekatonkheire, he meets a Santa Claus inside there and receives a present from him.

Back to the outside world, after a reborn Phoenix takes his leave, Haruto finds that the present is the Merry Christmas Ring and uses it to restore the destroyed gifts before the item fades away. As Tatsuro is caught delivering the presents to the orphanage by the owner, the two reconcile as Haruto wonders if the one who gave him the ring was the real Santa Claus himself.

Kamen Rider Wizard Volume 4 features episodes 14-17: The Film Director Came Back, After the Last Scene is..., The Miracle of Christmas and Another Magician. 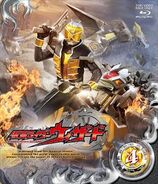 Retrieved from "https://kamenrider.fandom.com/wiki/The_Miracle_of_Christmas?oldid=580572"
Community content is available under CC-BY-SA unless otherwise noted.