The Magician's Grandmother (魔法使いの祖母, Mahōtsukai no Soba) is the twenty-fourth episode of Kamen Rider Wizard. It is the first part of a two-part arc focusing on Kosuke and his Gate grandmother, Toshie Nitoh. It also features one of Beast's Wizard Rings being used on the WizarDriver.

Kosuke's grandmother, Toshie, has appeared to visit him, but things get personal when she and Shunpei are targeted by the newest Phantoms.

Assuming her true from when Gremlin assumes his, Medusa refuses when she realizes he arranged Phoenix's downfall with the intention of taking his place. Though Gremlin denies it, Medusa agrees to consider his proposal after he shows her some results first. Elsewhere, with Haruto and Shunpei finding him giddy, Nitoh reveals that Rinko called him to meet her. He mistakes it for an invitation for a date just to later realize that she actually bringing his grandmother Toshie Nitoh who intends to take him back to Fukui. Not wanting his grandmother to know about his predicament, Nitoh runs off with Haruto and Rinko in pursuit while Shunpei gives a saddened Toshie a tour of the city to cheer her up. Toshie then is attacked by Weretiger who recognizes her as a Gate, and Shunpei flees with her while calling Haruto and the others. Arriving, Haruto transforms into Kamen Rider Wizard with Nitoh eventually becoming Kamen Rider Beast at a secluded location. Acting like a girl in order to deceive his grandma, Kamen Rider Beast fights Weretiger before he retreats as Wizard joins the fray.

Later, while Toshie spends the night at Omokagedō while taking Shunpei her side of the story while being ensured that that he cares for her, Nitoh reveals to Haruto how his grandmother always hounded him for his safety before he left for his exploration and asks him to take his grandmother home in his place. The next day, after being paid a visit by Gremlin, Weretiger poses as a bus driver to capture Toshie while leaving Haruto in the dust. However, Nitoh was following his grandmother in disguise and is forced to reveal his identity as Kamen Rider Beast to her when he transforms. Luckily, Kamen Rider Wizard intercepts the bus with the Machine Winger, assuming Water Style to fight as Beast uses the Chameleo Mantle. Though Weretiger had them end up with the other's ring, only Wizard can use the Dolphi Ring to Beast's dismay as he uses the Buffa Mantle instead.

Upon hearing that her grandson needs to eat Phantoms to survive and that Phantoms are born from Gates thrown into despair, Toshie decides to offer herself to Weretiger without resistance before Shunpei takes a hit meant for her. But before Kamen Rider Wizard can reach him, Gremlin arrives and worsens matters by taking Shunpei as a hostage while telling the Kamen Riders he will later inform them of a location where they can exchange their friend with Toshie. 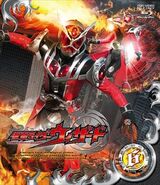 Retrieved from "https://kamenrider.fandom.com/wiki/The_Magician%27s_Grandmother?oldid=492168"
Community content is available under CC-BY-SA unless otherwise noted.