The Magic of Food

The Magic of Food (魔力が食事, Maryoku ga Shokuji) is the eighteenth episode of Kamen Rider Wizard. This episode marks the debut of the Buffa Mantle.

Haruto's and Kosuke's differing ways of handling things, from how to approach the issue on Phantoms to even eating doughnuts, causes a rift between the two magicians.

After being kicked out of a Shinto shrine where he was setting camp, Kosuke notices a scuba diver emerging from the water as he transforms into the Phantom Hydra to attack a man named Hiroshi Oikawa. Delighting in a pitch chance, giving Oikawa time to escape, Kosuke is annoyed when Haruto arrives. As Kosuke finds him grabbed by a furious Hydra, Haruto transforms into Kamen Rider Wizard to save Kosuke before he follows suit and becomes Kamen Rider Beast.

The Phantom flees with Beast upset that Wizard once again meddled in his feeding affairs. Later, while treated to Mayonnaise Donuts, Kosuke learns of the Gates and that Haruto does not need to feed on Phantoms. When Haruto asks how he became a magician, Kosuke reveals that he was in college when he found a secret chamber in old ruins where he finds a seal. Removing a ring and buckle from the seal, it caused the seal to break as Ghouls emerges. Compelled by the voice, Kosuke uses it and meets the Phantom Chimera who tells him that they are in a pact. However, the pact requires Kousuke to provide Beast Chimera with the magical energies of Phantoms to prolong his life.

Then Kosuke learns that Haruto's reason to fight Phantoms but stops him from revealing what becomes of the Gates if he fails to protect them. The next day, with Medusa formulating a plan to rectify the new turn of events, Hydra resurfaces to find Oikawa. While Haruto and Koyomi split up to cover ground in their search, she encounters a strange man she identifies as a Phantom who gives her a yellow magic stone meant for Haruto. Elsewhere, Kosuke is approached by Medusa who claims that Haruto lied about not being after the Phantoms for their energy.

Revealing that the despairing Gates are needed to procreate her kind, Medusa talks Kosuke into killing Haruto in return for a new supply of Phantoms to prolong his life. Not knowing who to believe, Kamen Rider Beast jumps into Kamen Rider Wizard's fight with Hydra and turns it into a three-way battle as he intends to give Oikawa to the highest bidder. 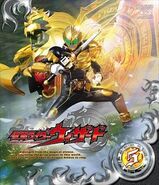 Retrieved from "https://kamenrider.fandom.com/wiki/The_Magic_of_Food?oldid=492162"
Community content is available under CC-BY-SA unless otherwise noted.