Bilgenia takes the guise of the doomed Professor Kuromatsu in order to lead Kohtaro into a trap for his defeat. 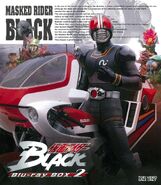 Retrieved from "https://kamenrider.fandom.com/wiki/The_Limit-Reaching_Hellish_Trap?oldid=579231"
Community content is available under CC-BY-SA unless otherwise noted.