The Last Hope (最後の希望, Saigo no Kibō) is the fifty-first episode of Kamen Rider Wizard. It features the final showdown to recover the Philosopher's Stone between Wizard and an evolved Gremlin.

Though technically the finale of Wizard's narrative, it is not the last episode. A two part TV special aired over the following two weeks, featuring Haruto, with other Wizard characters, teaming up with Decade and the other past 13 Heisei Riders, as well as the debut of Gaim before the premiere of his series.

With Gremlin in possession of the Philosopher's Stone, Koyomi dies. However, Fueki says that the light in Haruto's heart is the true Philosopher's Stone. Meanwhile, Gremlin, now evolved, goes on a rampage, and Kosuke cannot battle to save anyone or even himself from the monstrous Phantom.

Gremlin absorbs the Philosopher's Stone, increasing his powers. Back at the Omokagedō, Haruto informs the others about Koyomi's death and shuts himself in his room. However, it does not take long for Gremlin to start a rampage, destroying the Donut Shop Hungry's van during his assault. Despite having no magic power, Nitoh, Rinko, and Shunpei try their best to protect the civilians from Gremlin's Ghouls. Just when they find themselves cornered, Mayu, Yuzuru, and Yamamoto appear to rescue them. Together, the three Kamen Rider Mages dispose of the Ghouls, but are easily defeated by Gremlin. Determined to fulfill Koyomi's last wish, Haruto joins the fight but even Kamen Rider Wizard Infinity Style fails to defeat Gremlin and he is forced to turn back to Flame Style. Refusing to give up, Kamen Rider Wizard manages to thrust his hand into Gremlin's body to reach for the Philosopher's Stone inside him. Reunited with Koyomi in spirit, Haruto retrieves the stone, which transforms itself into the Hope Ring, and finishes Gremlin with an enhanced Kick Strike. Some time later, it is shown that Mayu has joined Section Zero with Rinko, Nitoh has resumed his travels now accompained by Yuzuru, Yamamoto is living happily with his wife and son, Shunpei has become Wajima's ringcraft apprentice, and Haruto has left to find a resting place for the Hope Ring, and with it Koyomi's spirit. 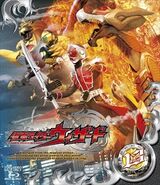 Retrieved from "https://kamenrider.fandom.com/wiki/The_Last_Hope?oldid=586778"
Community content is available under CC-BY-SA unless otherwise noted.