The King, the Panda, and the Flames of the Memory

The King, the Panda, and the Flames of the Memory (王とパンダと炎の記憶, Ō to Panda to Honō no Kioku) is the thirtieth episode of Kamen Rider OOO.

Eiji and Akira force Ankh to reveal the truth about OOO and his incomplete revival, while Maki reveals to Chiyoko the connection with his older sister.

After saving Ankh from the other Greeed, Eiji becomes Kamen Rider OOO Shauba to get him out. As Eiji takes Ankh back the Cous Coussier, they are met by Akira who is updated on the chain of events before he agrees to lend his Cell Medals in exchange for information on what occurred centuries ago. Having no choice, Ankh reveals that the Greeed were actually created for the sole purpose so the original OOO could become a living god. Though he helped the first OOO, Ankh was betrayed as the Kamen Rider used all fifteen Core Medal types he had at once to achieve his goal. However, instead of becoming a god, the Core Medals caused OOO's body to turn into the coffin that housed the four Greeed and Ankh's arm. At the same time, doing his own investigation, Shintaro learns from Kougami that Ankh's body was mummified and was only revived by Kougami taking the Condor Medal from it after finding it during his Trip to Europe. While this all occurred, Maki is driven by Chiyoko to his childhood home for a first aid kit. There, as he spends more time with Chiyoko, his memories come back more clearly, the prior loss being a defense mechanism for the horrible childhood he suffered, and he kicks Chiyoko out of the house. Sensing the Shachi-Panda Yummy making his move on Chiyoko, Eiji and Ankh follow Akira as the Kamen Riders battle the Shachi-Panda Yummy. Assuming Takajaba, Kamen Rider OOO holds the Yummy so Kamen Rider Birth can destroy him with the Breast Cannon. Elsewhere, Maki is forced to accept the fact that Hitomi was actually a heartless woman whose intention was to leave him upon getting married, which drove him to light the fire that killed her. As Kazari arrives, Maki accepts working for him full time as he destroys his lab so he can achieve an end before everything good in the world is gone. By then, with Ankh (Lost) at their side, Kazari and Maki take their leave with Eiji and Ankh astonished. 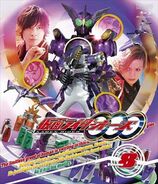 Retrieved from "https://kamenrider.fandom.com/wiki/The_King,_the_Panda,_and_the_Flames_of_the_Memory?oldid=491175"
Community content is available under CC-BY-SA unless otherwise noted.