The King's Power and the Queen's Resurrection

The King's Power and the Queen's Resurrection (王の力と王妃復活, Ō no Chikara to Ōhi Fukkatsu) is the thirty-fourth episode of Kamen Rider Gaim. It features the only appearance of Gridon Suika Arms.

With the world falling into chaos thanks to Ryoma, Zawame City has become an isolated place infested with Inves. Kouta's sister Akira, along with others in shelters, go outside to call for help. Meanwhile, Redyue broadcasts an announcement over the radio to the whole world stating that Helheim will completely take over the Earth in a year. At the same time, Inves are commanded to hunt the citizens of Zawame City.

Yoko confronts Mitsuzane about his actions as Zangetsu Shin and whether or not he will tell Kouta, while Redyue plans on using human technology to further her own goals as well as bring back Rosyuo's queen. But to do that, Redyue requires a sacrifice.

The Beat Riders regroup at Team Gaim's garage and discuss Oren's claim that there is someone posing as Zangetsu Shin before Mitsuzane appears, claiming to have been scouting Yggdrasill Tower. While Kaito still will not tell the truth about him to Kouta and the others, Mitsuzane is confronted by Yoko as he admits to helping the Over Lords while bribing her services with the Forbidden Fruit. But Yoko reveals she is more of a kingmaker and refuses to help him while unnerving him of how his treachery has left him homeless.

Meanwhile, after studying Earth's technology, Redyue presents to Rosyuo a means to revive his beloved and is given Grinsha to support her idea. Returning to find Mitsuzane in a foul mood, Redyue sees that Mitsuzane has accepted her offer to be proxy as she reveals that Rosyuo will give her the Forbidden Fruit because he cares only for his queen and nothing else. At Drupers, Kouta and Kaito discuss the Forbidden Fruit before Redyue appears on TV, having used Yggdrasill's computer systems to hack all broadcasts worldwide, where she demands humanity to surrender and be her playthings or she will open multiple Cracks across the entire planet so it will be covered by Helheim Forest within one year.

After the transmission, as Redyue tells a livid Mitsuzane that she has finished her machine, Kouta and Kaito are found by Akira as she reveals that there are people still trapped in Zawame and are in danger. Meanwhile, having watched the transmission, an angry Zack runs off to the Yggdrasill tower by himself, followed by Jonouchi and Oren before the group sees several Inves abducting people. The group transforms to defend the humans, with Knuckle giving Gridon the Suika Lockseed lent to him by Kaito to take out the numerous Inves. But as Gridon is unaware of how to operate the giant Suika Arms, Bravo uses its Odama Mode as a weapon with effective results, though at Gridon's expense.

Meanwhile, guided by Akira to the shelter she has been staying in, Gaim and Baron Lemon Energy Arms fight a pack of Inves led by Grinsha who are dragging people off. While fighting Gurinsha, Gaim watches Akira get kidnapped after he saves a boy from the Inves while fighting the Over Lord. Needing to finish the fight, Gaim transforms into Kiwami Arms to overpower Grinsha with Baron's help, but Redyue appears and absorbs the energy from Gaim's Kiwami Au Lait attack. She reveals that the kidnapped people are a power source for her machine and she discourages the two Armored Riders from pursuing her as she reminds them of her declaration of war on the Earth.

Within minutes, a barrage of strategic missiles are over Zawame City with the Over Lord gloating that the city's people have been forsaken by the rest of the world. Back in the tower, Rosyuo and Takatora have arrived just as the missiles are about to strike. Rosyuo decides to aid Redyue by freezing the missiles in place and then dissolving them into nothingness. Watching the scene from the tower, and seeing that humanity has no chance of defeating the Over Lords, a hopeless Mitsuzane reaffirms his belief that aligning himself with the Over Lords was his best choice. 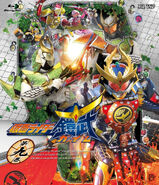 Retrieved from "https://kamenrider.fandom.com/wiki/The_King%27s_Power_and_the_Queen%27s_Resurrection?oldid=492572"
Community content is available under CC-BY-SA unless otherwise noted.