The Gifted Secret Weapon (贈られた秘密兵器, Okurareta Himitsu Heiki) is the nineteenth episode of Kamen Rider Gaim. It features the proper debut of Ryoma Sengoku as Kamen Rider Duke, as well as the debut of the Tulip Hopper Lock Vehicle and Baron in Suika Arms.

Duke fights against Gaim and Baron and manages to come out on top. As they lick their wounds, DJ Sagara appears and gives Kouta a present in the form of a Tulip Hopper Lockseed. When they arrive in the Helheim Forest, they are quickly surrounded by Yggdrasill, pressuring the two Beat Riders to fight to stay alive.

Despite using Jimber Lemon Arms, Gaim is defeated by the mysterious Rider who also defeats Baron when he steps in to fight him. After the assailant leaves, Kaito decides to find a way to break into Yggdrasill and find out the truth behind their actions and Kouta agrees to help them. Back at Team Gaim's place, the members of Teams Gaim and Baron celebrate that the joint event brought an end to the Inves Games, despite several dancers decided to quit because of it. Kouta then leaves to meet Kaito at Drupers where Mitsuzane appears asking to join their plan to infiltrate Yggdrasill, and the three decide that while Mitsuzane looks for a distraction, Kaito and Kouta will break into the complex by the crack that links it to Helheim Forest. However, Mitsuzane reveals the plan to his brother, who has Sid waiting for them with several troops riding some Tulip Hopper Lockvehicles. Once being kicked out of the forest, Kouta and Kaito are approached by DJ Sagara who presents Kouta with a Tulip Lockvehicle and when questioned about his intentions, Sagara claims that he just wants to figure out who the Helheim Forest will choose. Certain that Sid will not expect a second attack too soon, the duo attempts to break into Yggdrasill once more and after defeating the troops, Baron stays to confront Sigurd using Gaim's Suika Arms while Gaim pushes forward, just to be stopped by Zangetsu Shin. Baron passes by the crack to escape when the Lock Dealer strikes him from behind, driving Kaito into a corner until Ryoma appears to stop him. Meanwhile, Zangetsu Shin defeats Gaim Jimber Lemon Arms and when Kouta claims that his actions are evil, Takatora makes an offer to reveal to him what is the meaning of true evil, to which he agrees. 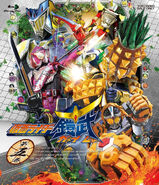 Retrieved from "https://kamenrider.fandom.com/wiki/The_Gifted_Secret_Weapon?oldid=492555"
Community content is available under CC-BY-SA unless otherwise noted.