Gamel rampages thinking that he can still revive the dead Mezool, while Ankh realizes his true desire even with Eiji now standing in his way.

After knocking the Kamen Riders off the bridge, a distraught Gamel gets ready to leave when Maki arrives and demands the Denki Unagi Medal that he took from Mezool's remains. But Gamel refuses, as he wants to revive her, getting into a brief fight Maki before running off. Managing to climb back up, Shintaro finds Eiji nowhere in sight. He looks for Eiji until Satonaka calls him about Gamel turning people into Cell Medals in his futile attempt to revive Mezool. Receiving the repaired Birth Driver, Shintaro becomes Kamen Rider Birth to fight Gamel. However, the fight goes bad for Shintaro until Akira Date unexpectedly appears with the prototype Birth Driver to transform into Kamen Rider Birth Prototype. Still at a disadvantage, the two Births use a do-or-die double Cell Burst in hopes of finishing the Greeed off. Though the attack does not finish Gamel, it does finish the damage that Maki started on his two Core Medals. On the verge of Cell Medal breakdown, Gamel gives his last candy to the Denki Unagi Medal before breaking up. Elsewhere, Eiji ends up on an island where his Greedification progresses as he looks for the missing OOO Driver. Elsewhere, Ankh heads to the Cous Coussier where he asks Hina if he can use Shingo's body permanently, but she refuses. Ankh finds his way to the island where Eiji has ended up to take back the OOO Driver. The two fight, with Ankh revealing that his true goal is to have a true life that the Greeed all lack. Though Eiji understands, he refuses to let Ankh have his way while he is forced to admit how the Greeed helped him achieve his wish to help others. Watching from afar, Maki decides to intensify the fight by transferring one of his Core Medals into Eiji, causing him to go mad while he takes the Taka Medal from Ankh. Eiji transforms using the Taka, Tora, and Batta Medals into a corrupted form of Kamen Rider OOO Tatoba Combo with purple eyes and then he transforms into a Greeed after another purple Core Medal is transferred into him. To defend himself, Ankh is forced to assume his complete Greeed form to fight the Eiji Greeed. 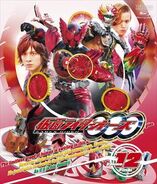 Retrieved from "https://kamenrider.fandom.com/wiki/The_Eiji_Greeed,_the_Double_Births,_and_Ankh%27s_Desire?oldid=491191"
Community content is available under CC-BY-SA unless otherwise noted.