The Doll and the Pianist

The Doll and the Pianist (人形とピアニスト, Ningyō to Pianisuto) is the fourth episode of Kamen Rider Wizard

While trying to fight a new Phantom that has appeared looking for a new Gate, Koyomi is suddenly attacked by Medusa.

Rinko walks into the Antique Shop Omokagedo and sees Haruto and Koyomi sitting together, with the latter glowing brightly as Haruto uses the Please Magic Ring. All attempts of Rinko getting to know what Haruto were quickly brushed aside.

Meanwhile, at a junkyard, Misa and Yugo wake up the lazy Caitsìth and force him to hunt down a new Gate in the form of pianist Eisaku Takagi. Just as Caitsìth attacks Eisaku at a conservatory, Haruto arrives to intervene while Rinko shows up to bring Eisaku to safety. After a lengthy battle, the Phantom retreats. Later, Haruto and Rinko explain to Eisaku about his situation as a Gate, but Eisaku is more concerned about his upcoming piano competition and could care less about being attacked.

It is revealed that Eisaku was a well renowned pianist who swept every contest he participated in since he was a child, but has not won anything since joining the conservatory; thus, he hopes for the upcoming competition to be his big comeback. Koyomi and Shunpei arrive at the conservatory, where Koyomi reveals to Rinko that she can see through a Phantom's disguise. Just as the four get into an argument, Caitsìth in his human form shows up. Haruto and Rinko chase after the Phantom, but lose him past the Donut Shop Hungry.

Meanwhile, Koyomi and Shunpei follow Eisaku toward a lake, concerned about his safety when Misa suddenly appears and transforms into Medusa. However, instead of Eisaku, Medusa targets Koyomi, entangling her with her hair and siphoning off her magical energy before walking away, leaving Koyomi comatose. Haruto and Rinko rush to the scene, where Haruto recharges Koyomi's mana through her Please Ring. Caitsìth once again targets Eisaku with the intent to chop off his hands, but Eisaku offers him to finish the job - much to the Phantom's shock.

Kamen Rider Wizard arrives to once again do battle with Caitsìth. He traps the Phantom with the Bind Magic Ring, but as he prepares to execute his Rider Kick, the spell malfunctions, as he is out of energy, also freeing Caitsìth from his binds. 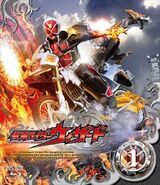 Retrieved from "https://kamenrider.fandom.com/wiki/The_Doll_and_the_Pianist?oldid=500427"
Community content is available under CC-BY-SA unless otherwise noted.