The Decoy, Quantification, and the Flaming Combo

A Decoy, the Qualifications, and the Blazing Combo (囮（おとり）と資格と炎のコンボ, Otori to Shikaku to Honō no Konbo) is the twentieth episode of Kamen Rider OOO. It is the debut of Tajadol Combo.

After being abandoned by Ankh desiring the return of one of his Core Medals from Kazari, Eiji is found by the cowardly hoodlum Yasu while he continues to ponder if his partner can really be trusted.

Claiming that Eiji has the Tora Medal, he flings the human off the building as Kazari and the Yummy-possessed Yamagane pursue. Refusing to leave Eiji behind, Hina takes the Kujaku Medal to force Ankh to help her find him. However, Ankh manages to tie her up with the intent of drowning her if she does not him give back his Core Medal. However, she refuses until he saves Eiji and Ankh is unable to pull off the deed.

Meanwhile, managing to save himself but finding everyone gone, Akira arrives at the Cous Coussier where he finds Shintaro before showing interest in the photographs around the room prior to seeing Eiji.

Akira then takes Shintaro out after closing time and has him try out the Birth Buster, causing him to fall back from the recoil to show him that he needs to train to use the Birth system. By morning, the Lion-Kurage Yummy consumes Yamagane and Kazari sends him after Eiji and destroy everything else to his content.

Sensing the Yummy, Ankh is forced to let Hina go so she can guard his Core Medal while dealing with the monster and waiting for Eiji despite his injuries. At the same time, having been saved by Yasu with his wounds treated and sharing stories of being used by their respective partners, Eiji also makes his way to the fight and meets up with Ankh who gives him the medals to become Kamen Rider OOO.

However, due to his strained leg, and with only two spare Core Medals left that would not fix the problem, OOO is at a disadvantage as Kamen Rider Birth arrives to take over the fight with his Shovel Arm knocking Yamagane out of the Yummy. However, the Lion-Kurage Yummy overpowers the Kamen Riders with his jellyfish as Kougami instructs Satonaka to take the Condor Medal and the Kujaku Candroid to the battle, along with various guns.

He hid the Condor Medal from him, Ankh is forced by Hina to have Eiji use his Core Medals this only one time, allowing Kamen Rider OOO to assume the Tajadol Combo (which is first appeared during battling against Kamen Rider Core). OOO Tajadol Combo eliminates the jellyfish before destroying the Lion-Kurage Yummy with the Prominence Drop Rider Kick, allowing Birth to take the Cell Medals.

As the transformation ends, Eiji collapses from the strain and Ankh takes back his Core Medals. Though Eiji begs him not to absorb them, a rainbow-colored aura forms into a wing emerging from Shingo's body, yet Ankh is unable to regenerate his body as Eiji had feared. 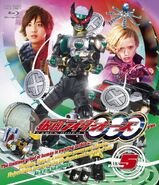 Retrieved from "https://kamenrider.fandom.com/wiki/The_Decoy,_Quantification,_and_the_Flaming_Combo?oldid=491165"
Community content is available under CC-BY-SA unless otherwise noted.