Michio Konishi
The Dangerous Time Thief (あぶない時間泥棒, Abunai Jikan Dorobō) is the forty-first episode of Kamen Rider Black. It is notable for featuring the very first time travel event in the Kamen Rider Series and the only such incident in the Showa era, which would become more prevelant in the Heisei one.

A boy grieving over his father's death by Gorgom becomes abducted by two samurai thrown out of time by a Mutant's magic time-controlling box. 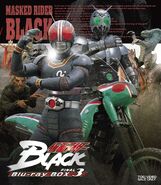