The Beginning of the Sabbath

The Beginning of the Sabbath (サバトの幕開け, Sabato no Makuake) is the forty-ninth episode of Kamen Rider Wizard.

With Yamamoto and Yuzuru both Kamen Rider Mages under White Wizard's thrall, Haruto and Koyomi are kidnapped to begin the new Sabbath. After Kosuke is approached by Beast Chimera in his dreams, he goes to assist Rinko and Shunpei to help save Haruto and Koyomi.

Haruto defends himself against Yamamoto's attacks until Koyomi appears and the Green Kamen Rider Mage takes advantage of the distraction to defeat him. Meanwhile, Kosuke awakens at the Omokagedō and fills the others in about Mayu's kidnapping. Mayu awakens beside Haruto at White Wizard's altar and learns from Fueki that both Yuzuru and Yamamoto are not acting on their own accord, but are being controlled by him instead. Now in possession of all four magicians, Fueki makes preparations to begin the new Sabbath.

Kosuke, Shunpei, and Rinko look in Fueki's house for clues about where he could have taken Haruto and the others when Gremlin appears before them. As the four magicians are restrained in separate points around the city, Fueki reveals to Haruto that the first Sabbath failed to ressurect Koyomi because he used ordinary Phantoms as pillars, and he could not manage to gather enough mana for it. However, Haruto's awakening as a magician gave him the idea to strenghten the ritual by using magicians instead of Phantoms to activate it, and he will now able to extend the range of the Sabbath to encompass the entirety of the city and gather mana from all Gates inside the city. Not only will this turn all the Gates into Phantoms, but will also kill anyone who isn't a Gate.

When Kosuke and the others learn the same information from Gremlin, they decide to look for a way to stop the ritual from being held. Despite Haruto's pleas to stop it, Fueki makes use of the ring he obtained from Wajima, the Eclipse Ring, to bring forth a solar eclipse onto the city and start the Sabbath. Haruto, Mayu, Yuzuru and Yamamoto are all forced to transform as the mana is drawn out of them, which creates a massive spell crest across Tokyo. All humans inside the area of the spell start felling ill, except Kosuke, who confronts White Wizard by himself. He promises to stop the Sabbath and find a way to save Koyomi before transforming and fighting White Wizard. Despite a hard battle and using the power of Hyper, he is defeated once again.

As White Wizard prepares to finish Kosuke, Chimera appears to the Rider and tells him he's met his match. Kosuke tells Chimera that there's all the mana he could want outside, and he intends to let him out to eat it. Chimera tells Kosuke that he can't be let out, and even if he was, Kosuke doesn't know what Chimera might do to him if released. Kosuke declares that if he's finished anyway, he might as well go for the interesting end...

White Wizard swings his Hamel Cane at Kosuke, however the Rider grabs it with inches to spare. Resuming the fight, Kosuke wrestles the Cane away and uses it to stab and destroy his Driver. After a few seconds, Chimera is released into the world as Kosuke loses his powers telling his Phantom its lunchtime. Chimera flies around the city, eating the mana enveloping it and causing the Sabbath to fail. Everyone in the city is released, and the four Riders are also freed (with Yuzuru and Yamamoto released from Fueki's power).

After his massive meal, Chimera returns and knocks White Wizard away before approaching Kosuke who think Chimera is about to make good on his threat to eat him alive. Chimera however tells Kosuke that he never ceases to amaze him before releasing him from his obligation to keep him fed. Declaring Kosuke to be free, Chimera flies away to parts unknown.

As Kosuke looks at his now powerless Driver, White Wizard approaches him full of fury that his last hope has been destroyed, promising to send Kosuke to the depths of despair as he dies. Kosuke tells him he won't despair, as he has one last hope... as behind White Wizard, Haruto approaches ready to make the Magician pay for everything he has done. 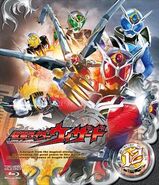 Retrieved from "https://kamenrider.fandom.com/wiki/The_Beginning_of_the_Sabbath?oldid=562367"
Community content is available under CC-BY-SA unless otherwise noted.