I'm in Love With Your Intelligence!

Teruo Nikaido had a crush on Chiharu Ebii for a long time, but upon becoming jealous towards Match Enmusubi, he took it upon himself to become the Storming Penguin Raider when receiving his Raidriser and Storming Penguin Progrisekey.I'm in Love With Your Intelligence!

After his Raidriser was destroyed and Storming Penguin Progrisekey is back on Gai Amatsu's Hand, Nikaido was seen with Ebii on the beach as Nikaido proposes to Ebii with Ebii saying yes. They later sent their wedding invitation card to Aruto.It's Our Turn

Due to the timeline changes caused by Time Jacker Finis, Teruo is seen fighting alongside the resistance fighters against Humagears under the command of Will. [1]

"Raidrise! Storming Penguin! The winds are at his command."
―Transformation announcement via Raidriser[src]

Teruo Nikaido is portrayed by Gaimon (ガイモン, Gaimon). Following the elder judge from episode 22, Teruo is the second character from Kamen Rider: Reiwa The First Generation to have his actor make an appearance in the main TV series. 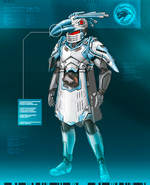 Retrieved from "https://kamenrider.fandom.com/wiki/Teruo_Nikaido?oldid=670050"
Community content is available under CC-BY-SA unless otherwise noted.