Tears (涙, Namida) is the thirty-first episode of Kamen Rider Wizard. It is the concluding part of a two-part arc which climaxes with the evolution of Wizard with the resurrection of Wizardragon and the debut of Infinity Style.

With Legion too strong for even Kosuke to battle, Haruto must find a way to restore Wizardragon's powers before Legion strikes again.

With Wizardragon destroyed, Haruto loses his magical powers and Legion takes his leave. With Shunpei's help, Kosuke takes him back to the Omokagedō to rest and after explaining the situation to the others, he leaves to confront Legion by himself. Meanwhile, Wiseman asks Gremlin about his interest in the Philosopher's Stone and the Phantom replies that what he truly wants is the same as him. Legion keeps attacking innocents, but does not finds satisfaction on it anymore, as he failed to destroy Haruto's mind completely and decides to look for him, to finish his work from before!

After Kosuke asks him to leave Legion to his care, Haruto is approached by Kenta and Shiori who ask him to perform magic for them again, but he reveals to them that he lost his powers. Kenta then reveals that he was learning magic tricks to cheer up his sister who is about to undergo a surgery, and claims that to them, Haruto's kindness was more important than his magic.

Back at the shop, Haruto finds Koyomi left her Please Ring behind and realizes that she is missing. Knowing that without his magic, Koyomi will soon run out of mana and perish, Haruto looks for her. During this time Kosuke finds and confronts Legion, transforming into Kamen Rider Beast Hyper, but ends up getting his leg restrained by the Phantom, who leaves to keep searching for Haruto who finds Koyomi where they first met after the day after the eclipse. Koyomi also mentions how he encouraged her at that time, and thanks him for giving her a reason to keep living to the end.

When Legion finds them, Haruto is beaten up by the Phantom until Koyomi runs out of mana and collapses. As Haruto starts crying for her, he claims that he will never give up and then, his powers return in a blast of light-based mana, creating the Infinity Ring with his tears. When Haruto equips the Wizardriver, Wizardragon appears before him, revealing that his determination is what brought him back to life and offers his help once more.

Haruto then uses the ring to transform into Kamen Rider Wizard Infinity Style and summons Wizardragon in the form of his new weapon, the Axcalibur.

Legion tries to enter into Haruto's mind again with no success and after weakening the enemy, the Kamen Rider finishes him with the Axcalibur's Shining Strike. Watched by White Wizard from afar who says that the Infinity Style is a problem, Haruto brings Koyomi back to life and rejoices with Nitoh and the others.

Weeks later, it is revealed that Shiori's surgery was successful, while Medusa is informed by Wiseman, much to her horrified surprise, that from then on she will work under Gremlin's orders. 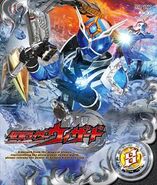 Retrieved from "https://kamenrider.fandom.com/wiki/Tears?oldid=568738"
Community content is available under CC-BY-SA unless otherwise noted.