She is a Home-Selling Humagear

Tatsumi belonged to family with low earnings. He and his family used to live in a small house with almost no necessities or luxuries. Because of such a life, Tatsumi started dreaming of living in a large house, and ended up becoming a real-estate agent.

In the present, Tatsumi is chosen by Gai as the representative for real-estate stage competition against the Humagear Smile. Tatsumi boastfully to Gai that he will succeed. Despite his success during the competition, Gai disappointed by his rating sale for almost being competed which giving a great pressure to Tatsumi, unaware that Gai actually wanted to make him going on malicious act. During the depression, Tatsumi was given a Raidriser alongside the Splashing Whale Progrisekey by Naki while he was on the way back to his office.

Being taken by the pressure, Tatsumi used the Raidriser and caused a havoc on a home which is introduced by Smile. Aruto fights, but only going on without a proper fight which letting Tatsumi to succeed on breaking the house. This resulted his selling rate goes higher than before. Gai suspects Tatsumi to cheat, but Tatsumi seems to cover his lie. Despite that, Tatsumi aware that Gai has suspected him and goes to throw a tantrum towards Smile on the next day. Tatsumi is shocked that his act makes Smile get hacked and turn into a Magia and runs away in fear.

This experience soon giving a lesson to Tatsumi as when a millionaire asks for a new home and Smile has discovered one, Tatsumi provokes Oyakata, the carpenter to turn into a Magia and gives the Magia a one side battle as Tatsumi becomes the Whale Raider. Isamu is on the site and going to beat them all using Vulcan Punching Kong, but fails and Gai arrives to jack Isamu's Punching Kong power, destroying Oyakata and somehow turning the side of Tatsumi's cheating.

Unfortunately for Tatsumi, Aruto creates five more Oyakata and manages to build the same home on a different site, giving the winning towards Smile as Tatsumi doesn't think the rich man truly needs. This angers him to the point of destroying Smile. But Aruto becomes Zero-One Shining Assault Hopper to defeat Tatsumi, this time for real. Tatsumi cries on the pressure that he is put and actually wants to admit Smile's achievement. But since he has been defeated even as a Raider, he finally lets go of his depression completely and asks for forgiveness, giving the winning praise to Smile. But as Tatsumi predicted, ZAIA actually won by the profit achievement.

Tatsumi is a very boastful man and arrogant with his skills on luring people to buy the real-estate from him. Despite his boastful, his result is indeed showing the promise which even Smile unable to surpass without Tatsumi going on cheating. The trauma he has since a kid become a moral support for him to help people to have a huge house and having fun.

Unfortunately, Gai knows his weak point and pressuring him and it makes Tatsumi to lose confidence, even the value of with family, going only to lure people to buy a big house instead. After Aruto was able to convince him, Tatsumi shows his guilt from his cheating path and admitted his loss fairly.

"Raidrise! Splashing Whale! An aqua current that encompasses everything around it."
―Transformation announcement via Raidriser[src] 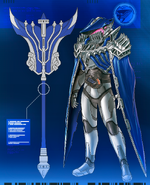 Retrieved from "https://kamenrider.fandom.com/wiki/Tatsumi_Arayashiki?oldid=648548"
Community content is available under CC-BY-SA unless otherwise noted.