Shinji and Yui have returned to the hospital with Eri. Shinji offers to bring Ren back to visit her but she refuses asking if Ren has been fighting the whole time she was asleep. On Shinji and Yui's return to the Cafe, they notice Tojo working behind the counter. Due to Shinji, Yui and Ren being absent from the cafe for long periods of time, Yui's grandmother decided to hire a part-time worker. Shinji asks Tojo to tell him how to seal Mirror World because Ren may die if they don't but Tojo refuses. He also tells Shinji that Ren is far from being a true hero as he only fights for himself and no-one else. Downstairs, Shinji realizes that Tojo appears to be staring at Yui. Kitaoka contacts Reiko to confirm her meeting with Asakura. Meanwhile, back at the Cafe, Yui goes out for the day. At the same time, Shinji realises that Tojo could be the one that is trying to attack Yui. His predictions were correct with Tojo following Yui around. The new Rider is just about to come out of Mirror World but Shinji gets to Yui before him. Shinji then pursues the Rider into Mirror World. It activates a Sword Vent using his Rider System, however it quickly begins to start fading in Mirror World. Shinji intercepts Tojo outside of Mirror World and learns that killing Yui would render Mirror World and the Rider Battle useless and would stop the Mirror Monsters from targeting humans. He also learns that the Rider's name is Alternative. Back at the lab, Nakamura yells at Tojo for telling Shinji everything. Hideyuki demands that he keep his calm. Nakamura, in a fit of rage attempts to destroy the mirrors in the lab with a chair but Hideyuki restrains him. Back at the Cafe, Shinji gets a call from Yui who tells her that Eri is probably going to go back to sleep soon. Knight is busy destroying 3 monsters in Mirror World. He easily disposes of them and returns to the cafe where a waiting Shinji is. Shinji tells him about Eri but Ren seems uncaring. Ren defends his reason for fighting; to keep Eri alive. Shinji, who arrives at the hospital sees Alternative and intercepts him in Mirror World. Ren also arrives at the hospital and takes Eri out for a ride to the beach. Eventually Eri falls back to sleep. Ryuki gains the advantage against Alternative and tells him that his theory of sacrificing 1 person for many is wrong. As Ryuki leaves, Alternative attacks him from behind. Just as Alternative is about to finish off Ryuki, Tiger appears from nowhere and destroys Alternative with a Final Vent. Alternative is revealed to be Nakamura who then fades away. Outside of Mirror World, Tiger reveals himself to be Tojo. Tojo tells Shinji that he doesn't wish to kill Yui anymore. Back at the lab, Hideyuki retains the Alternative Deck. At Kantou Prison, a vexed Asakura is met by 2 prison guards who handcuff him to the poles as Reiko & Kitaoka walk down the corridor for their meeting. 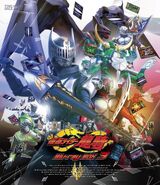 Retrieved from "https://kamenrider.fandom.com/wiki/Targeted_Yui?oldid=598056"
Community content is available under CC-BY-SA unless otherwise noted.