"Kill! I will kill you with my own hands!"
―Takashi's words before battling Kiva[src]

Kamen Rider Arc (仮面ライダーアーク, Kamen Raidā Āku, Masked Rider Arc), alternatively spelt Kamen Rider Ark[1], is the main antagonist of Kamen Rider Kiva: King of the Castle in the Demon World. He is the leader of the Legendorga race who was defeated by the original Kiva and sealed within a coffin.

When death row inmate, Takashi Sugimura (杉村 隆, Sugimura Takashi) stumbled onto his seal, the essence of the evil rider possessed him, preventing him from dying until Arc would rise with help from his minions.

Kamen Rider Kiva King of the Castle in the Demon World

As above stated, Kamen Rider Arc was a powerful leader of the Legendorga who led his race to glory, attacking any race that stood in his way. However, the original Kiva stood against Arc and defeated him. However, Arc was not gone for good, and his essence was sealed within a coffin.

Years later, the place where he was sealed became the ground for a prison, that included the mentally broken, Takashi Sugimura. When Sugimura tried to escape tried by taking hostage Towa Sakakibara. However Otoya Kurenai and Wataru interfere his plans being cornered by the police, when the Zebra Fangire appeared, Takashi encounters ancient ruins under the prison he came across Arc's coffin. Arc then took over Sugimura's body before Sugimura spent the next twenty years in prison. according to Mamoru Shima, he was sent to death several times but did not die due to Arc.

Arc in Sugimura's body is seen is his castle among his Legendorga servants listening to humans' screams. When Arc touches a trumpet, he says that he will defeat the new Kiva and chooses to then play the trumpet. Arc and his race then commenced the takeover of humans and any race that stood in its way, while also targeting the current Kamen Rider Kiva, Wataru Kurenai. Eventually, Wataru and his father, Otoya Kurenai confronted Arc.

Arc attempted to make Wataru his servant through the Legendorga Baptism, becoming Kiva Flight Style. However, Otoya managed to communicate with his son and Wataru fought against Arc in a fierce battle leaving the castle destroyed when kiva launched his Darkness Moon Break, which with one blow blocked him in attempt to interfere with the transformation of Kiva Emperor. Arc, however, did not understand how his power was rivaled by Kiva. Faced with no other option, Arc decided to risk an all-or-nothing attack by drawing from the power of his race, by attracting the moon and resurfaces later as Legend Arc. Surprising Otoya by launching an attack that seriously damaged him, with it causing Wataru to fight more aggressively. Kiva in Flight Style took to the skies in an aerial dogfight, reaching the city with Castle Doran and Wataru finally destroying Arc.

Momotaros's King of the Castle in Burning Red

The Castle in the Demon World Mystery is Solved!

Takashi had a brief appearance in archive footage as Kamen Rider Arc describe by Urataros as the king of Legendorga and also his height is 3 meters and is the most powerful Rider.The Castle in the Demon World Mystery is Solved!

Kamen Rider Arc appears on a poster, when Sento Kiryu and Sougo Tokiwa they find Ataru Hisanagahe brings them to his room which is filled with Kamen Rider memorabilia, with Sougo and Sento stunned to see toys of themselves. Ataru reveals that Kamen Riders are fictional.Kamen Rider Heisei Generations FOREVER

Kamen Rider Arc and Legend Arc appears as a playable character with the other Heisei and Showa Kamen Riders in Kamen Rider Riderbout. 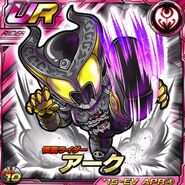 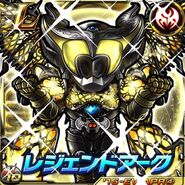 Kamen Rider Ark appears as a playable character with other Riders and monsters in Kamen Rider Break Joker.

Arc along with the movie villains 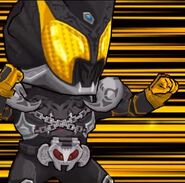 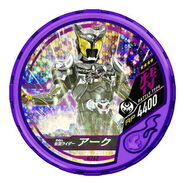 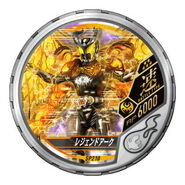 With the assistance of the mechanical monster Arc Kivat (アークキバット, Āku Kibatto), he can transform into Arc, the King of the Castle in the Demon World.

As Arc, he wields the 4m long Arc Trident (アークトライデント, Āku Toraidento) able to cause climatic disasters on earth.

This form has the following finisher:

Through the use of the Wake Up Fuestle, Arc transforms into Legend Arc (レジェンドアーク, Rejendo Āku) by assimilating the demon-eye of the moon to obtain the full power of his race, growing wings and a second set of arms. In this form,Kamen Rider Arc is able to fly. In the process, Arc Kivat assumes his Mecha Kivat (メカキバット, Meka Kibatto) form as his persona cast comes off.

This form has the following finisher:

This form is exclusive to Kamen Rider Kiva: King of the Castle in the Demon World.

Legend Arc concept art
Add a photo to this gallery

Retrieved from "https://kamenrider.fandom.com/wiki/Takashi_Sugimura?oldid=692418"
Community content is available under CC-BY-SA unless otherwise noted.