Before Suga debuted as an actor, he worked several part-time jobs while going to actor training school. His family had owned a sushi restaurant but was kicked out of the house when they discovered his intention of not taking over the restaurant. In 1999, he made his debut appearance in a stage production. In 2002, he was cast in the lead role of Kamen Rider Ryuki, playing Shinji Kido. 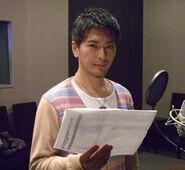 Retrieved from "https://kamenrider.fandom.com/wiki/Takamasa_Suga?oldid=664550"
Community content is available under CC-BY-SA unless otherwise noted.